Fanfic / All That Shimmers 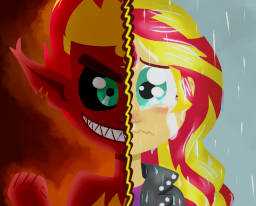 All That Shimmers
My name is Sunset Shimmer and welcome to my cruddy life.

is a My Little Pony: Equestria Girls fanfic by Justice4243

, set immediately after the events of the first movie.

Sunset Shimmer is having a bad night. She turned into a demon, was forcefully turned back, and now has to deal with all the people she's wronged in the past. As luck would have it, it seems like her demon self isn't done with her, either.

Can the power of friendship overcome this maniacal creature, or is Sunset Shimmer doomed to bring death and destruction to everyone she meets?

All That Shimmers provides examples of: