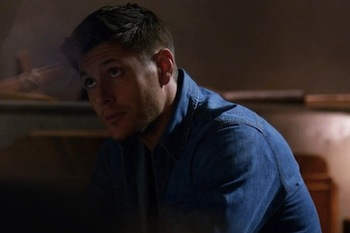 Cas, you got your ears on? Listen, you know I am not one for praying.
"Really, Sam? Trash-talking a god? Seriously?"
— Dean
Advertisement:

While waiting to hear back from Kevin about the next trial, Sam and Dean head to Great Falls, Montana

, to investigate a possible zombie. Sam and Dean are at the police station, pretending to be FBI agents, when a John Doe is brought in dead from a grizzly bear attack. The State Trooper is convinced this is the same man he saw dead on the side of the road who got up and walked away. While Dean and Sam are in the morgue, the wounds fade from the body of the John Doe, and he opens his eyes and gets up. He tells them that he dies every day and returns to life after a few hours. This has been happening to him since he was found on the side of a mountain in Europe around 8 years ago. He goes by the name of Shane, but does not remember his real name or anything else before his rescue from the mountain.

That night, a mysterious woman in leather with a silver blade attacks Shane, and he is able to fight her off even though she easily neutralizes Sam and Dean. Shane then dies off a heart attack. While Sam and Dean are waiting by his side for Shane to resurrect, a woman named Hayley knocks on the door of the motel. Hayley explains that she is looking for the John Doe suspected of being a zombie in the newspaper. It turns out that she met Shane when she was trapped on the mountain by an avalanche. They became close, but after she witnessed him die and resurrect, she freaked out and left. She later gave birth to his son, Oliver, who started dying every day a couple of months ago.

The brothers realize Shane is actually the Titan Prometheus, and that Zeus is behind the curse afflicting him and his son. Sam also realizes the woman who attacked Prometheus in the motel room was Artemis, Zeus' daughter and the goddess of hunters. They summon Zeus and trap him in order to get him to remove the curse from Oliver, but Zeus refuses to help unless they release him from the trap, which the desperate Hayley does. However, Zeus has no intention of helping Oliver and tortures Prometheus with lightning while Sam and Dean are captured by Artemis. Sam plays on the fact that Artemis loves Prometheus and convinces her to stand up to her father and demand he release Prometheus and Oliver. When he refuses, Artemis shoots an arrow at Zeus, but Zeus pulls Prometheus in front of him. The arrow hits Prometheus, who pushes the arrow through his body and into Zeus. Both Prometheus and Zeus die, but Oliver is released from the curse of dying every day.

Sam confesses to Dean that he is afraid that he might die trying to close the Hell Gates, but still does not tell Dean about the fact that he has been spitting up blood. Dean prays to Castiel, asking for protection for his brother, but Castiel does not answer.