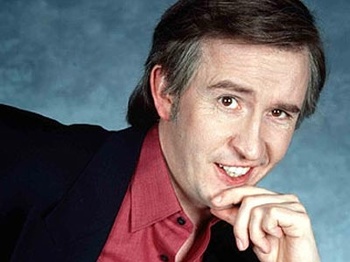 "Needless to say, I had the last laugh."

A collection of radio shows, TV series and one-off specials linked by the appearance, either as a significant recurring role or as a main character, of Alan Partridge, a hapless, socially inept and idiotic sports commentator-turned TV chat-show host-turned local radio personality played by Steve Coogan.

Partridge was created for On the Hour, a spoof radio news program which would eventually be adapted for television as The Day Today. A popular Breakout Character, he later went on to star as the host of a mock radio chat-show, Knowing Me, Knowing You with Alan Partridge, which like the earlier show was later adapted for television, lasting one series and a Christmas special. The character later returned in I'm Alan Partridge, a sitcom which took a darker, harsher and more intimate look at the character after various disasters in the other two series reduced him to a failed Jaded Washout trying to get back on television while maintaining a career on local radio in Norwich.

As well as these series, the character has also appeared in various one-off specials, including several appearances in Comic Relief. A spoof autobiography, I, Partridge: We Need To Talk About Alan was published in 2011 with a follow-up, Nomad, published in 2016.

Alan Partridge appears in the following: