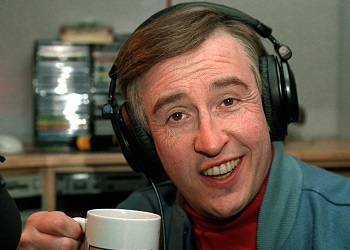 "My face was designed as a leisure accessory."
Played By: Steve Coogan
"Go to London, I guarantee you’ll either be mugged or not appreciated. Catch the train to London, stopping at Rejection, Disappointment, Backstabbing Central and Shattered Dreams Parkway."

The main character of the series, Alan, a former sports commentator and host of the BBC chat show Knowing Me, Knowing You... with Alan Partridge, was dismissed from the BBC partly for punching Chief Commissioning Editor Tony Hayers in the face with a stuffed partridge and partly because his programmes were of a low standard, delivering ever-declining ratings. In series one he is divorced from his wife Carol, lives in the Linton Travel Tavern and is reduced to working the graveyard shift on Radio Norwich whilst desperately trying to get back on television in any capacity.

Played By: Felicity Montagu
"Lynn's not my wife. She's my PA. Hard worker. But there's no affection."
—Alan Partridge

Alan's hard-working, long-suffering, personal assistant, Lynn appears to run Alan's life to such an extent that he cannot survive without her organisational skills; despite this, he usually treats her with little more than contempt. Besides dealing with Alan's working-life, Lynn's other duties range from the banal to the truly ridiculous — accompanying Alan to visit a show home, buying medicinal powder for Alan's fungal foot infections, cooling Alan with a hand-fan, and frequently listening patiently to Alan's pointless conversations and endless whining.

Lynn is a member of a local Baptist church, which Alan finds strange but is willing to tolerate. Her mother, with whom Lynn possibly lives, is apparently housebound, but Lynn seems able to balance her life between looking after her mother's affairs and those of Alan. When accompanying Alan, Lynn appears inhibited by him, but seems capable of easily blending into social situations when Alan is not present. Despite her intense and frequently ludicrous workload, Lynn receives a paltry £8,000 per year, due to Alan's greedy penny-pinching.

Played By: David Scheider
"Tony Hayers. I tell you Sophie, you’ve not witnessed pure evil until you’ve looked into the eyes of a man who’s just cancelled your second series."
—Alan Partridge

The Chief Commissioning Editor for BBC Television. He wasn't a huge fan of Alan to begin with, which made Alan punching him with a frozen chicken live on television and then assaulting him with some cheese after being informed his show wasn't going to be recommissioned something of a mistake on Alan's part.

Alan's ex-wife. He hasn't quite managed to get over their divorce.

An all-purpose worker at the Linton Travel Tavern, Michael speaks with a heavy Geordie accent, which Alan barely understands (or claims not to) and, being Alan, never fails to demand clarification. Michael is arguably Alan's only friend, and Alan is glad of his presence when he needs to have a heart-to-heart or, more often, inane chat; their friendship is clearly not on an even basis, however, as Michael only ever refers to Alan as 'Mr. Partridge' and Alan clearly regards Michael with a great deal of disdain. Michael is almost as desperate and neurotic a character as Alan, and is very emotionally disturbed (shown most clearly when Alan looks out of his room window to see Michael tearing at his hair in a state of some distress).

Michael frequently tells stories of his time in the British army, to the delight of Alan, especially if they are of a salacious or violent nature. During a period of military placement in the Philippines, Michael married a Filipino woman, and the two moved back to Michael's native Newcastle upon Tyne. However, his wife left him and now lives with his brother in Sunderland, possibly shedding light on the origins of Michael's neuroticism.

Dave is a Radio Norwich DJ who runs the programme right after Alan's "graveyard slot" show. During the handover every morning, Alan always tries to engage in witty banter with Dave, but their chatting fails to disguise the bitter rivalry between them. Dave is an alcoholic and has a driving ban, according to Alan. Much to Alan's surprise and chagrin, Dave is a friend of Spandau Ballet's Tony Hadley.

Knowing Me Knowing You With Alan Partridge

The front man of Partridge's house-band.

The manager of the Linton Travel Tavern, Susan appears to be a stereotypical front-desk worker, with a dazzling smile and sickly sweet manner. However, even these forced skills are not enough to deal with Alan's clumsy flirting and inane comments. Alan frequently makes tactless comments to Susan about her appearance (once suggesting to her that she "could have been throwing up all night" but that her smile would not falter). In reaction to these comments, Susan's painted-on smile is sometimes momentarily replaced by a look of shock and bemusement.

A recently employed receptionist at the Travel Tavern, Sophie is also rarely without a smile; however, in her case it is normally because she is suppressing a laugh over Alan's antics. While Susan endures Alan's appalling lack of social skills with a smile, Sophie often can't contain her amusement and has to walk away so she doesn't laugh in his face. Alan is bemused by her behaviour and is annoyed when he overhears her doing an impression of him.

Ben is another member of staff at the Travel Tavern and Sophie's boyfriend. Alan is irked by his youth and his very laid-back approach to his job, but later when Ben admires Alan's new Bang & Olufsen speaker set, they have a brief chat about music and Alan feels a moment of bonding with him, but he still ends up acting like an out-of-touch old fart.

Alan's thick-accented Ukrainian girlfriend. Sonja, who is fourteen years Alan's junior, possesses a very excitable, scatterbrained personality which leads Alan to describe her as 'mildly cretinous'. Easily amused, she delights greatly in pulling lame practical jokes and showering Alan with cheap (and unwanted) gifts such as London souvenirs and personalised coffee mugs and cushions emblazoned with their faces. She is very devoted to Alan and clearly treasures him, although he demonstrates little genuine affection for her in return and clearly bases their relationship around the ego-boost produced by their age difference and the sex.

An Irish radio DJ at North Norfolk Digital who, after being fired by the new owners, returns with a shotgun bent on revenge.

This Time with Alan Partridge

Played by: Susannah Fielding
Alan's co-host on This Time. A smooth, charming and professional young woman, Jennie is everything that a modern female television presenter should be, which naturally means that she can't stand Alan.
Ruth

The roving reporter for This Time, often seen via live cam. Alan once spilled sherry on her at a behind-the-scenes function at the BBC, and she hasn't forgotten it.

The long-running host of This Time, and a broadcasting legend. John's sudden illness provides an unexpected opportunity for Alan to return to the BBC. It's quickly revealed, however, that away from the cameras he had plenty of secrets...