Roleplay / Lords Of Creation Fate Of The Faithful 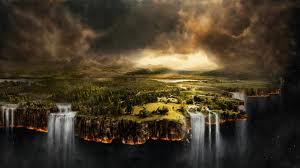 Eden. Paradise in the new world and a soon-to-be battleground
Advertisement:

Not to be confused with the roleplaying game published in the mid-eighties or the series of books by SM Sterling.

by a group of experienced veterans of both the site and the game itself, and a few-not-so-experienced ones.

The game works like this (at least in this edition; others handle things differently): Create a god with a personality and unique outlook on the world, then you give them their domains, like in D&D, they only have two at first but gaining more makes them more powerful. You get ten points to distribute between their combat stats HP, attack and defense. How you distribute these points determines your god's specific manner of fighting and how survivable they are. Once a god has entered the game they usually begin creating, plotting, or watching within minutes and the posts just stack up from there. In order to do anything especially big a god needs to expend AP, a limited but renewable resource which a god gets more of each rollover (Typically one a week on Saturday) in a quantity depending on their power level. There is no set win-objective since a Lords of creation game is ongoing and doesn't end, the only goals to work towards are the ones that the players make themselves and to craft a story/setting for the ages. And yes, one of the players is developing a setting based on the game.