Contains spoilers (including Spoiled by the Format) for the entire show. Browse through at your own caution. 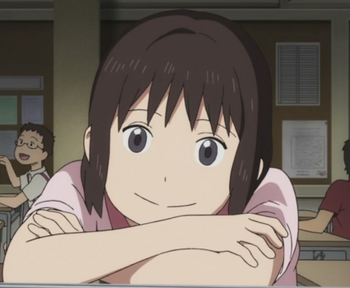 Mirai Onozawa is one of the main characters of the show, and is the sister of Yuuki Onozawa. She, prior to the earthquake, was a rather pessimistic, ungrateful girl. After having to take her brother to a museum, she wished the world would just crack. She ends up getting her wish.

Yuuki is one of the main characters of the show, and the younger brother of Yuuki Onozawa.

A delivery girl that Mirai & Yuuki met at the museum. After it turns out they live near each other, the trio decide to travel back home together, with Mari hoping to find her mother and daughter.