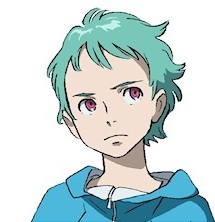 The main protagonist, he finds himself thrust into the conflict with the Secrets after a run in with Gazelle leads him to the Nirvash. From there he begins piloting it to save his island home. Pilots RA272 Nirvash, called the Nirvash Mark I in series.

Ao's childhood friend, a daughter of one of the island's prominent families. She was one of the survivors of the first Scub Burst that happened soon after Eureka appeared on the island, and which killed her mother and left her an Ill Girl. All this has earned Eureka and Ao the hatred of her father. As of episode 14 she pilots Eureka's Nirvash typeZERO spec2.

Génération Bleu is a multinational organization funded by the UN to deal with Scub Bursts and the Secrets which appear with them. Though UN subordinates on paper, they operate as mercenaries in practice, offering their services for a price.

One of the Génération Bleu rapid response teams. They operate from the Triton.
Ivica Tanović 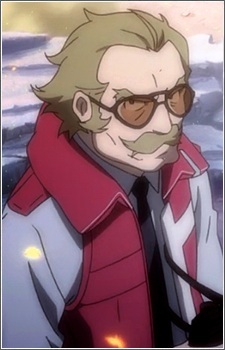 Triton's owner-captain and the team leader. A very tall and powerful man in his forties, he's an arguably both a Reasonable Authority Figure and a Bunny-Ears Lawyer, being a skilled leader and sly negotiator, but also highly eccentric, like, actually, most of his team. 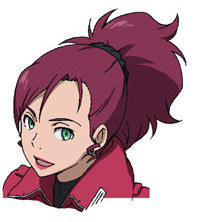 Ivica's permanently harried second-in-command, being an Only Sane Woman in a team of Bunny Ears Lawyers. Sometimes they push her too hard. 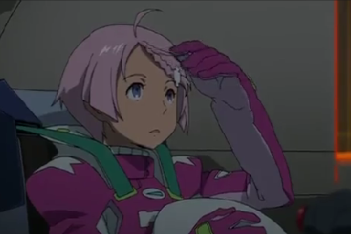 One of the team's IFO pilots, an eccentric Otaku girl who is a practically One of Us. However, there are hints that she is more than she seems. Pilots the RA304 Kyrie, and later takes the RA302 Credo. In episode 21, it's revealed that her real name is Ellen Brooks, and she's actually from 1981, having been brought forward by Eureka to save her life. 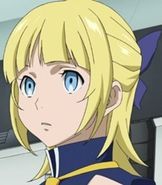 Pied Piper's second IFO pilot, a cheerful blonde girl, the only daughter of the Génération Bleu's head, Christophe Blanc. She sees herself as Ao's rival. Pilots the RA164 Alleluia.

Another Génération Bleu rapid response team. They operate from the Medon, a ship identical to the Triton in all but color. The team (though not its members) ceases to exist in episode 16, after AO wipes out the Secret army with his new Wave-Motion Gun and as a consequence prevents the Norwegian Scub Coral from ever appearing. This in turn causes the McCaffrey family to never move to the Coral Plant established there, so they continue to live as ordinary bakers. Bruno's fate is not elaborated upon, while Maggie instead became an IFO pilot for the Americans.
Bruno Hans

Team leader and captain of the Medon. 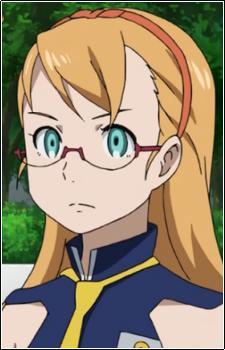 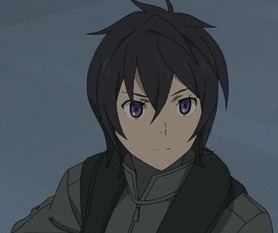 Pilots the RA302 Credo. After the Cosmic Retcon, she pilots an Eisenhower.

The team on Orbital Fortress Poseidon, Génération Bleu's Space Station. They guard the quartz collected by Génération Bleu's pilots. The Poseidon is destroyed by Truth, but they manage to escape its destruction in their ship "Great Proteus".
Hannah Bester 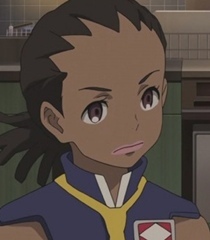 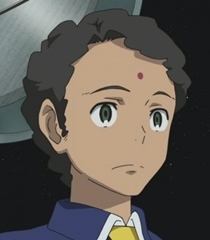 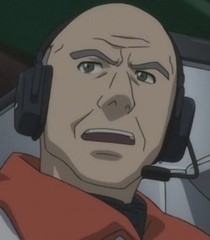 The lead mechanic for Génération Bleu. He and his team maintain the IFOs. 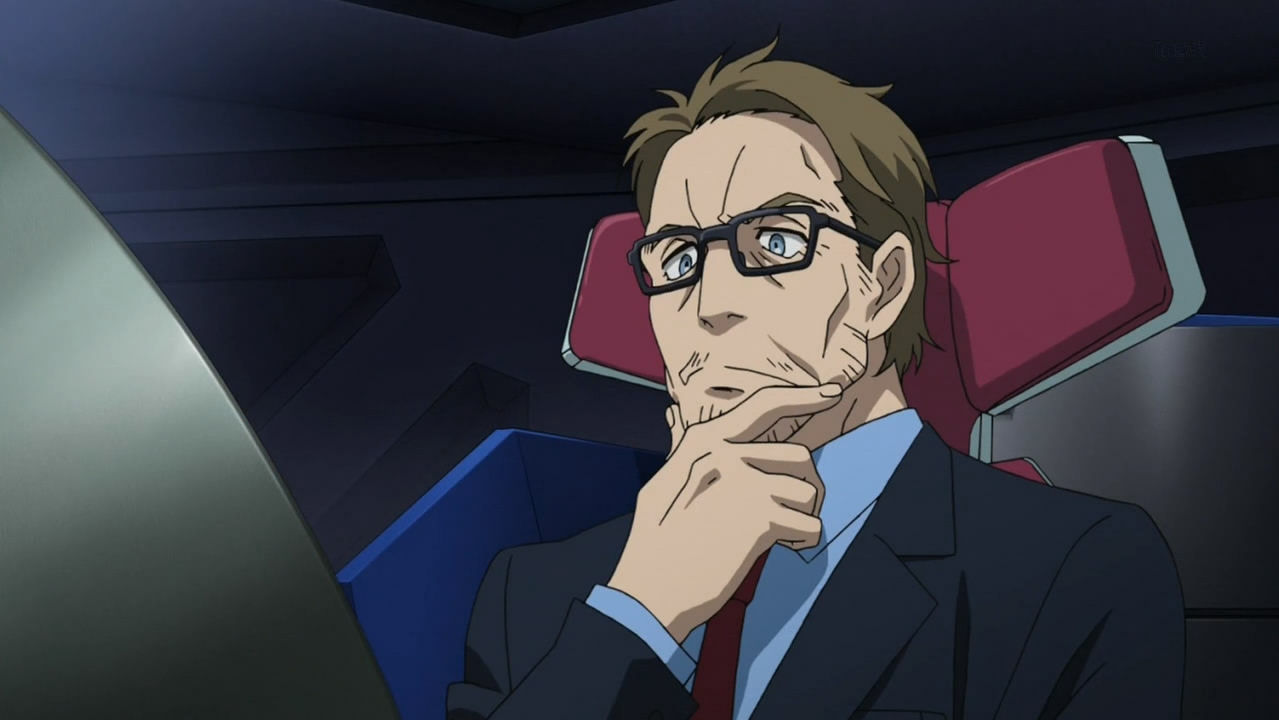 The head of Génération Bleu and Fleur's father. 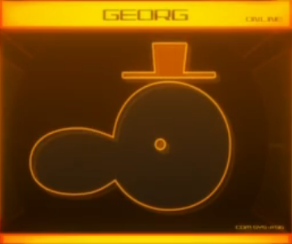 An AI that acts as a Mission Control and support for Génération Bleu's Rapid Response Teams. Very much a Deadpan Snarker, he loves commenting on everything that happens.

The liaison between Génération Bleu and its parent company, Big Blue World. It's his job to keep Christophe in line with the company's goals, though his success in this matter tends to vary. He also keeps an eye on some of its more valuable assets. He temporarily takes over leadership of Team Goldilocks after Bruno's demise, until the team is erased from history and that never happened.

The people of the Iwato Jima, the Okinawan island where Eureka landed and gave birth to Ao. Because the Scub Bursts started to happen soon after, the island's inhabitants, with a few notable exceptions, blamed it all on her and Ao. In addition, they also vented their frustration at Okinawa's half-assed independence on them.

Naru's father and one of the community leaders. His wife died in the first Scub Burst that also injured Naru, and he has since hated Ao and Eureka with a passion. There's hints that he was the one who betrayed Eureka to the Americans.

Gazelle's father, a famous folk singer and sanshin player, also one of the island's leaders. A very traditional man, he seems to be against Ao in no small part due to racism. 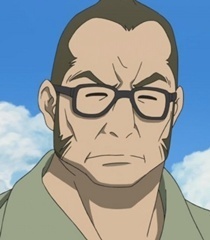 Pippo's father and an officer in the Okinawan Self-Defense Forces. He's Iwato Jima's militia commander and seems to be somewhat less of a jerk and more politically motivated, as he wants to trade Ao for full Okinawan independence. 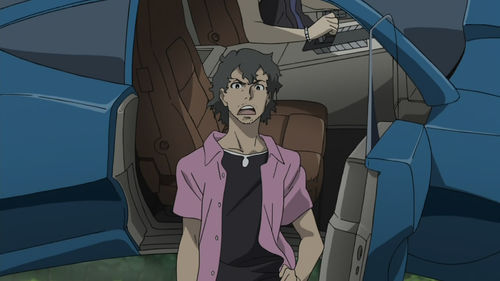 Kazuyuki's son and the head of a small courier company (no questions asked) that he runs on Iwato Jima. He's estranged from his father and actually regrets bullying Ao earlier on his instigation. A shrewd and cunning smuggler, it's during a job for the JAF that he ends up with the key to the Nirvash, and from there brings Ao into the conflict. He and his crew stow away and follow Ao to Switzerland, where he forces the president of Génération Bleu to hire them as investigators, and uses that position to try to figure what's going on with the world. Born as Jirou Kinjou.

Teruhiko's son and Gazelle's childhood friend. A big guy who's cautious because he's been unlucky since childhood. Born as Reo Niigaki 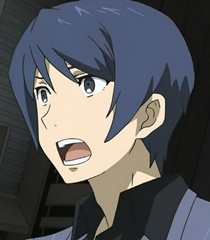 The third in Gazelle's company, he's a skilled hacker and information gatherer. His father runs a prominent trapar mining company (which one is not specified), and his name is well-known enough that Nakamura knew of him by reputation alone. Being a multinational and multiracial, he has no stake in the political struggle around Okinawa and thus sometimes comes off as cold and indifferent. 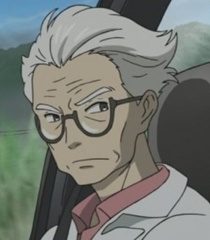 Iwato Jima's physician, he was the only one of the island's elders who was against the common "let's blame everything on the blue-haired people" attitude prevalent there. He took in Eureka and hid her until she disappeared, and then adopted Ao as his grandson. 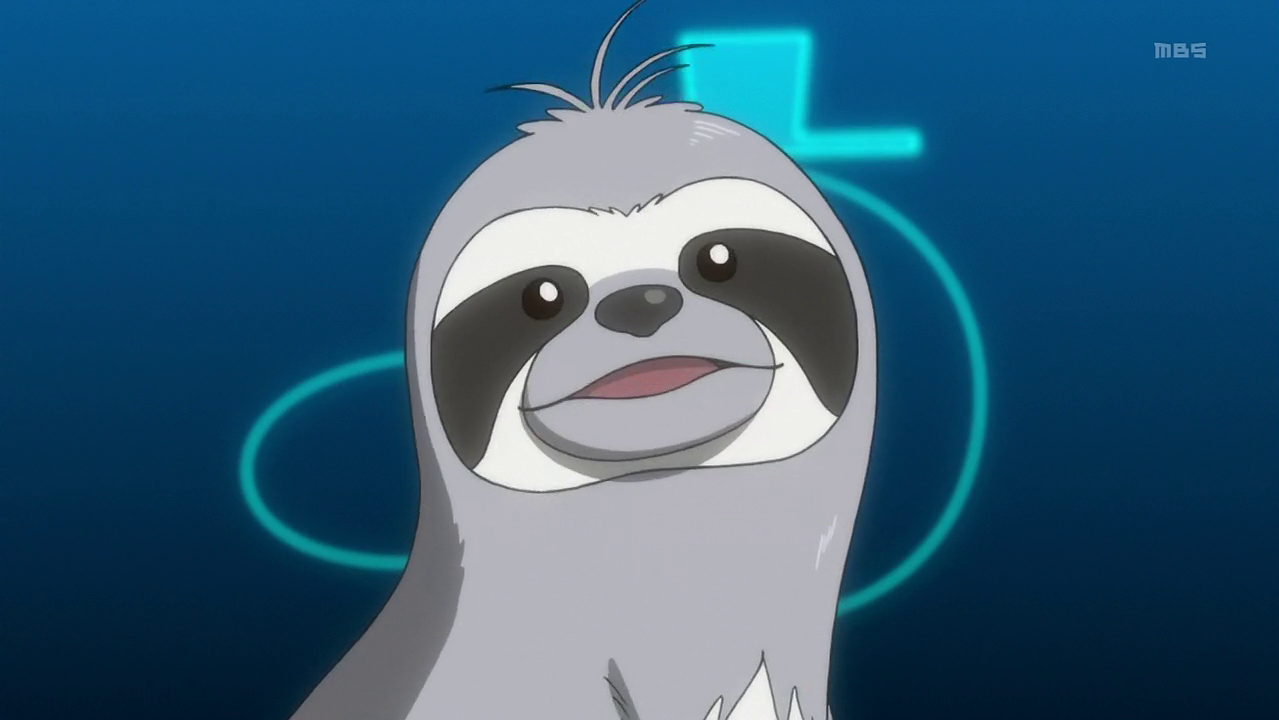 Naru's pet sloth. When Ao leaves to join Génération Bleu she gives Noah to him.

A JSDF Military Intelligence officer hell-bent on obtaining the trapar technology for Japan. Japan, being isolated from the world community due to the whole Okinawa debacle, and lacking a Scub Coral that could be used for trapar production, lags behind the rest of the world significantly, so he is set on correcting this. Still, his junior status and over the top ways mean that he's mostly ignored even by his own side. By the end of episode 9 he begins working with Truth.

USAF officer apparently responsible for Scub phenomena observation. So far he has proved largely a neutral force, concentrating on information gathering and observations, rather than on a direct actions. 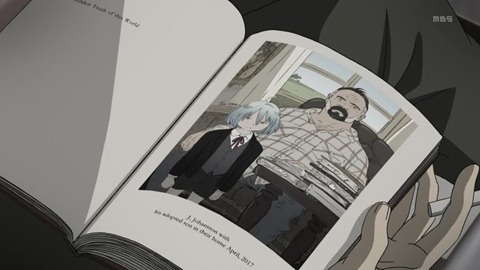 A picture of Johansen with a young Truth.

A scientist who published a book explaining how the current world is wrong due to interference in history by the Scub Coral and Secrets. He is variously regarded as a quack or a prophet. With Nakamura trying to spin the Secrets as the protectors of mankind, his book is becoming much more popular. 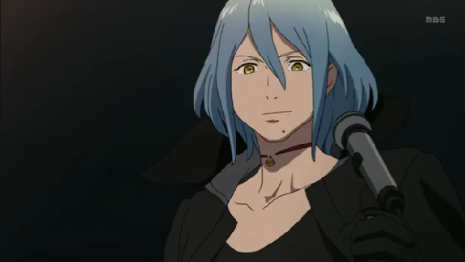 A mysterious character who doesn't even know who he is. He goes around causing conflict in an effort to discover that fact. He's actually a Secret in human form, the same Secret which fought Eureka before she vanished ten years ago. Johansen found him in the aftermath of the Okinawan Scub Burst. In episode 20, he merges with the Kanon, an LFO archetype kept in the basement of Génération Bleu, after Christophe Blanc tries to kill him with a Quartz explosion. 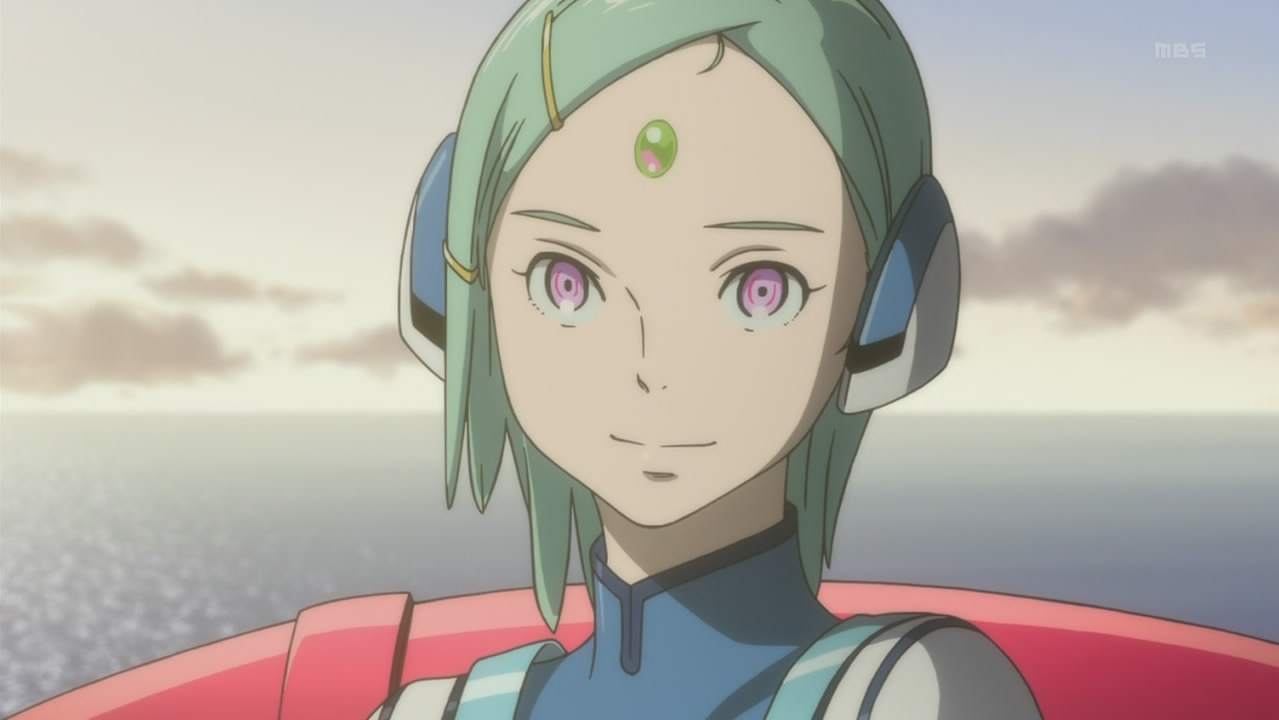 Ao's Missing Mom. 13 years before the series begins, she fell from the sky into the ocean. She was rescued by Mitsuo Arata and gave birth to Ao on Okinawa. She disappeared under mysterious circumstances in the Okinawan Scub Burst ten years ago. In the present, she appears in episode 12, except from her perspective that hasn't happened yet. She is the original pilot of the Nirvash Mark I, while her past self piloted the Nirvash typeZERO spec2. 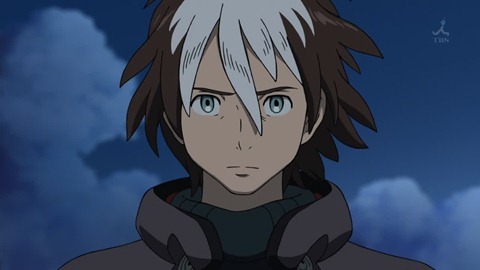 Ao's Disappeared Dad and husband of Eureka. When he and Eureka were doing experiments on the disappearance of Scub Coral in their world, she and the Nirvash spec2 were taken by the Scub, leaving him behind. She came back at some point, only to leave again with the Mark 1 Nirvash sometime later. He finally shows up in episode 22, a resident of the Bad Future. 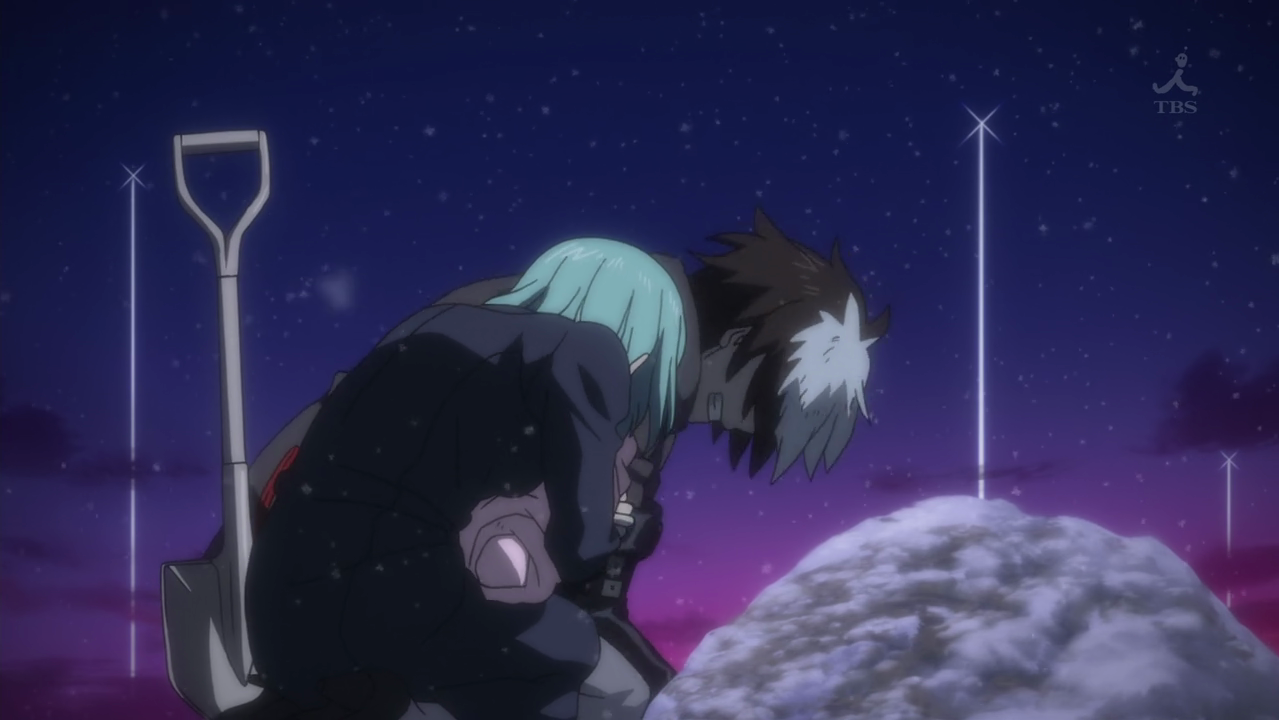 Amber being buried by her parents.
Voiced by: None