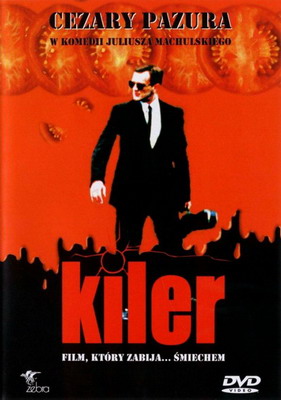 The movie that kills... with laughter.

A notorious gangster known as "The Guillotine" has been assassinated by the Killer - a well-known hitman for hire, who has left a wake of dead bodies through Europe. Jerzy Kiler, a taxi driver, stops to gawk for a moment at the confusion around the crime scene, before he returns to his cab and a drunken passenger in it. The next morning he's rudely awakened by an anti-terrorist group, apprehended and literally carried out of his flat. As it turns out, they found the murder weapon, a sniper rifle, inside his car's trunk and received an anonymous call accusing Jerzy of being the elusive Killer. Despite claiming his innocence and that all this is a huge mistake, he's quickly sent to prison.

To his surprise, "his" reputation gains him a lot of respect from the inmates. After he kills a fellow prisoner completely by accident, even more people start to believe that Jerzy is the real deal. While being transported to another prison, he's broken out by mobsters working for "Siara" - Poland's most fearsome crime lord and Killer's frequent employer. With the police, gangsters and rest of the country taking him for the Killer, Kiler decides that explaining won't do him any good and decides to give in and "be" the Killer - especially after he learns about a container full of cash that Siara and his partner, senator Ferdynand Lipski, acquired by a Landmark Sale of the Warsaw's Palace of Culture and Science to a Latino mob boss.

Soundtrack by the one, the only Kuba Sienkiewicz (No relation that we know of).