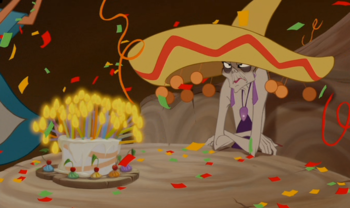 We apologize for the scary beyond all reason woman under the actually very lovely sombrero.
Pretty much the whole movie. It's a 1.3-hour "Looney Tunes-meets-The Muppets"-style comedy routine run by and written for Deadpan Snarkers. You could arguably call it the Crowning Moment of Funny for the entire Disney Animated Canon.
Advertisement:

...they were right; that is pretty much the whole movie!