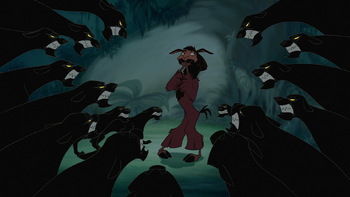 Hah! (gasp!)note We did consider putting an image of Yzma in here - they're all nightmare fuel - but chose not to scar you for life. You're welcome.
"Ok, that was the freakiest thing I've ever seen."
— Kuzco.
Advertisement: