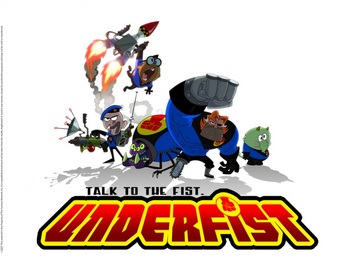 Underfist, also called Underfist: Halloween Bash is an animated special of The Grim Adventures of Billy & Mandy meant to be setup for a Spin-Off of the show, but the project never went through due to Maxwell Atoms' contract with Cartoon Network expiring. Instead, it serves as the Grand Finale to Billy and Mandy, along with the Grim & Evil franchise as a whole.
Advertisement:

The special aired on October 12, 2008 and features Irwin, Hoss Delgado, Skarr, Jeff the Spider and Fred Fredburger teaming up to fight an army of candy from the Underworld.