Film / The Gangster, The Cop, The Devil 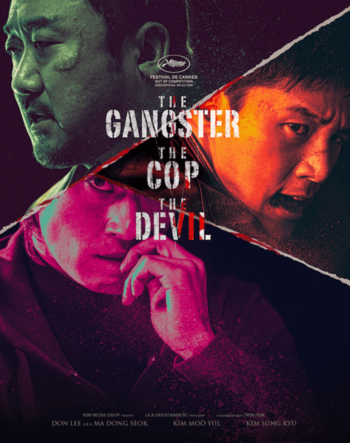 The Gangster, The Cop, The Devil ((Korean: 악인전) is a 2019 Korean action movie directed by Won-Tae Lee.

Detective Jung Tae-suk (Kim Mu-yeol) is a Cowboy Cop. He is dissatisfied with the rampant corruption on the force that allows organized crime to operate almost in the open, and the lack of respect officers get. This is made only worse when he realizes a serial killer is operating in his region and the surroundings, but lacking firm evidence and fearing Jurisdiction Friction, Da Chief refuses to treat the murders as anything but isolated incidents.

Jang Dong-soo (Ma Dong-seok) is a brutal mob boss with a penchant for brawling, who recently had to put a weaker rival back in his place. As he drives home alone one evening, he's attacked by the serial killer, but manages to fight him off. Eager for revenge, and wanting to remedy the loss of face his hospitalization caused, he sends his men to find the killer. While he has the manpower, he lacks the scientific and crime expertise the cops has, and soon makes an offer to Jung Tae-suk: He'll give Jung the manpower he lacks to pursue the killer, while Jung provides the expertise, and they will share information. If Jung finds the killer first, Jung can arrest him. If Jang gets the killer first, he'll gruesomely kill him in revenge to show what happens to those who cross him. Sensing there's no other way to stop the killer who has so far operated in the shadows, the detective accepts.

Little do both parties know that the killer is not done, that he has plans of his own, and Jang Dong-soo's own criminal dealings are about to make the situation way more complicated.

On 5 May 2019, it was announced that Sylvester Stallone will produce an american remake of The Gangster, The Cop, The Devil, with Ma Dong-seok reprising his role as Jang Dong-soo.

The Gangster, The Cop, The Devil contains examples of: