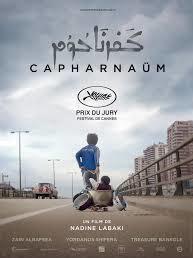 Capernaum is a 2018 Lebanese film by Nadine Labaki. It won the Grand Jury Prize at the Cannes Film Festival. It is a 2019 nominee for the Academy Award for Best Foreign Language Film.

The protagonist is Zain, a (seemingly) 12-year-old boy born into poverty. The film starts In Medias Res with Zain serving a 5-year sentence for stabbing a man. In prison, he decided to sue his parents for giving birth to him condemning him to a life of poverty. The movie moves back and forth between the courtroom and Zain's story, uncovering the reasons why he attempted murder and took his parents into the court.