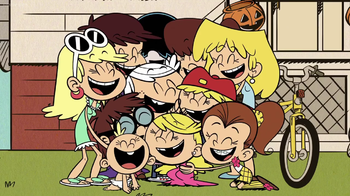 One boy and ten girls? Wouldn’t trade it for the world!
Lola: Lincoln, you bonehead! You gave them the wrong picture!
Lori: Yep! I knew you'd blow this, too.
Lincoln: No, I gave them the right one. The one that shows the real you. The perfect you.
Sisters: (hugs Lincoln) Aww! Thank you, Lincoln!
— "Picture Perfect"

Even a show about a family of 10 girls and 1 brother can warm our heart with a few moments every couple of episodes.

110b — Sleuth or Consequences

319a — Everybody Loves Leni

A Star is Scorned

How Double Dare You!

Saved by the Spell