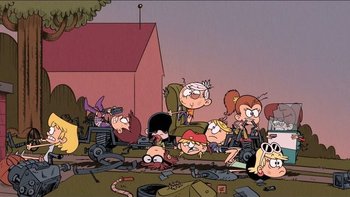 "That was my first car! And my dad's first car! AND HIS DAD'S FIRST CAR!"
Lincoln: Clyde and I had to start a business for school, so we kind of, uh, charged boys for my advice about girls.
Sisters: (pause, then laughing)
Lincoln: Go ahead; get it out of your systems.
Sisters: (still laughing)
Lincoln: Are you done now?
Lori: No. (continues to laugh along with her sisters)
— "Lincoln Loud: Girl Guru". Doubles as the average Loud House fan’s reaction to these moments.
Advertisement:

Just like all the other Nicktoons, The Loud House also has a whole lot of funny moments. No surprises for which of the laughs are going here.

No End in Bite

Put a Sock in It

Clyde and His Dads

110b — Sleuth or Consequences

A Fridge Too Far

What Wood Lincoln Do?

The Spies Who Loved Me

Room for Improvement with the Casagrandes

Face the Music with the Casagrandes

No Show with the Casagrandes

Pranks for the Memories with the Casagrandes

Lucha Fever with the Casagrandes

Leader of the Rack

Kings of the Con

Don't You Fore-get About Me

A Star is Scorned

How Double Dare You?

Saved by the Spell

No Bus, No Fuss

Diamonds are for Never