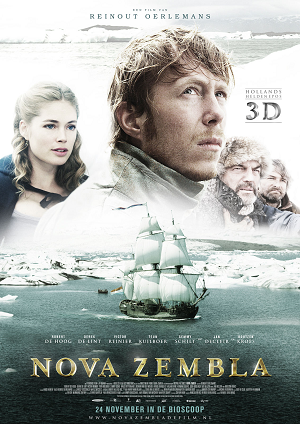 Nova Zembla (Dutch for Novaya Zemlya, a large, largely uinhabitated land mass north of Russia, and the main setting of the film), is a historical Dutch Biopic film from 2011, as well as the first Dutch 3D film. It is a Biopic of Willem Barentsz, a Dutch explorer, who on three journeys in 1594, 1595, and 1596/97, explored the modern Barents Sea north of Norway and western Russia, in search of the Northeast Passage to China. The story centers on Gerrit de Veer, a young writer and Naïve Newcomer, being assigned to keep the ships log during the third journey, which he volunteers to with the motivation of proving himself to his love, Catherina, who is the daughter of Petrus Plancius, a cartographer who is also the main funder of the expedition. However, at Novaya Zemlya, the ship gets stuck in the ice, and the crew is forced to winter, and naturally, Tragedy Ensues.