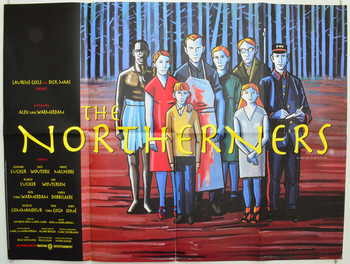 De Noorderlingen (translated title "The Northerners") is a 1992 black comedy by Alex van Warmerdam. It is his second film after Abel and this one is generally considered his top achievement in the cinema even though his filmography up to some point is more or less equally respected.

It is set on a tiny town in the middle of nowhere. The story is mostly centered on two families and a postman. The first family is that of a forester who is childless because he is sterile. The other family, that of a butcher who wants to make love with his wife who rejects him because he treats her too rough and she does not feel like lovemaking.