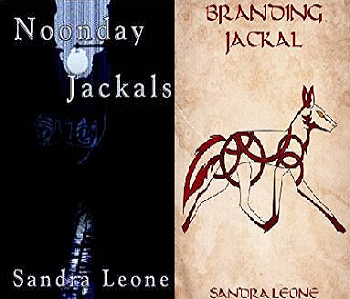 Noonday Jackals is a book written by Sandra Leone. It now has a sequel called Branding Jackal.

Jackal is not like most other kids. For one, she has a super-freaky sense of smell. Two, she's getting more powers all the time. Three, she's all alone. She has little to no memory of her past, except for what leaks through over the course of the book.

One day, Jackal meets a boy named Frank. Frank helps integrate her into a group called the Mad Dogs, and she soon gets to know and like most of them. But one of them, Edge, is a real dreg and keeps trying to get her killed. It doesn't help that there's a man who is stalking her and paying people to put her through her paces. What's Jackal gonna do?

He is later shown to be very much displeased that he did not get laid that night.