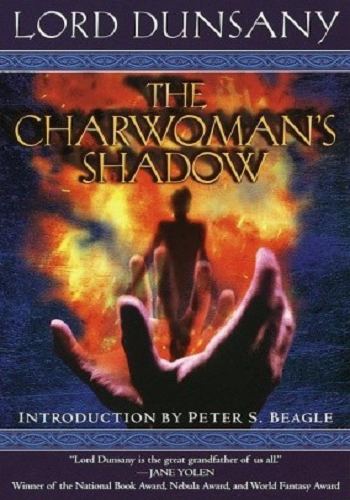 The Charwoman's Shadow is a fantasy novel written by Lord Dunsany in 1926. In Spain, during the Golden Age, Gonsalvo Alanzo's father once met a nameless magician in the woods and described to him the craft of boar hunting.
Advertisement:

Years later Gonsalvo is lord of the tower but his affairs have not prospered, and he needs gold for the dowry of his daughter Mirandola. He sends his son Ramon Alonzo to the magician to learn how to make gold. The magician considers himself in debt to Ramon's grandfather for the knowledge of boar hunting, and agrees to teach him the use of the Philospher's Stone for a fee: his shadow. The old charwoman who works for the magician warns Ramon not to give up his shadow, as she did, but the coffer for Mirandola's dowry is empty, and Ramon loves his sister.