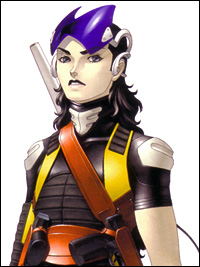 The main character in the game, who starts out as an amnesic gladiator. As soon as he becomes a citizen of the Center, he discovers that his true identity is Aleph, the prophesied Messiah of Tokyo Millennium.
Advertisement:

He is actually an Artificial Human, conceived in Hiroko's womb and then raised in a test tube as part of a plan by the impatient Messians to "force" the return of their saviour. As a result, he also aged rapidly, growing 10 years every 24 hours for a short time.

In the "Neutral" alignment ending, prior to the Final Boss battle he is forewarned that by defying the will of YHVH, he will suffer a never-ending cycle of torture, death and reincarnation without hope of release as punishment for the "Ultimate Sin" (deicide). He is not told this on the Law and Chaos endings, however. 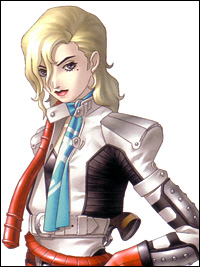 The main heroine of the game. A loyal Temple Knight of the Center who frequently crosses paths with Aleph, eventually becoming his main companion in all alignment routes.

She is (technically) Aleph's mother, with her womb being used to conceive him as part of the Messiah Project and Fake Memories of being a Temple Knight implanted into her to hide the truth. Her father is Mekata, the head scientist of the Messiah Project who was forced to use her as part of the experiment, which led to his defection from the Center. 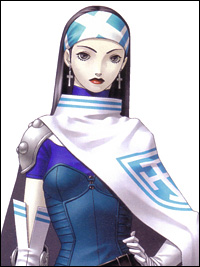 A Temple Knight who is assigned by the Center to aid Aleph in laying the groundwork for the Thousand Year Kingdom, acting as his first companion. She is loyal to both the Center and Aleph, to the point of swearing eternal allegiance to him.

Like Aleph, she is an Artificial Human created as part of the Messiah Project to act as the partner to the Messiah. She makes a Heroic Sacrifice to save him from a mortal blow from Daleth, and later appears as a wandering soul to offer him the last of her power. 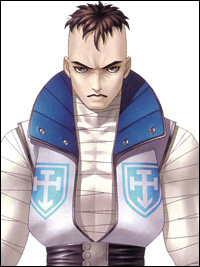 A devoted Temple Knight of the Center, who acts as support to Aleph. As time goes by, he begins to question the methods used by the Center to bring about the Thousand Year Kingdom, and eventually rebels.

Like Aleph, he is an Artificial Human created by the Center as part of the Messiah Project. However, he has another identity: he is also one-half of Satan, a direct subordinate of YHVH. He fuses with Set to regain his true form and memories, and follows the orders of YHVH to use a powerful Kill Sat called the Megiddo Arc to destroy all life on the planet as divine judgement. He succeeds in the Law path, but the destruction convinces him that YHVH has gone too far and he defects to Aleph's side. However, he crumbles to dust after helping to defeat his creator. 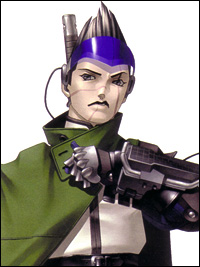 A powerful warrior who proclaims himself to be the true Messiah, and Aleph to be a fake. Arrogant and proud, he challenges Aleph to a number of fights throughout the game.

Like Aleph, he is an Artificial Human created by the Messiah Project specifically to act as a Designated Villain to Aleph and catalyse support for the Messiah. After discovering the truth, he drops his aggression towards Aleph and becomes an ally of sorts, though he does not participate in the endgame events. 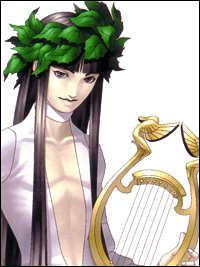 A mysterious young man ruling over the idyllic forest of Arcadia.

He is a servant of the Center. Arcadia is a virtual construct created as a prototype of the Thousand Year Kingdom, with the intention of plugging everyone into the system if successful. Furthermore, Gimmel is more than willing to kill anyone who finds out the truth. His true self in the real world is a skinny bald man plugged into one of the Arcadia life-support pods. 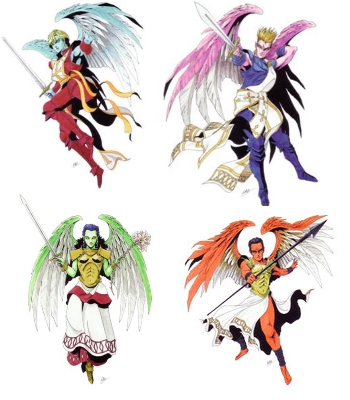 The leaders of Millenium. With the Bishop and Zayin as their representatives, they find Aleph and proceed to make him the Messiah.

They're really the four Archangels: Michael, Raphael, Uriel, and Gabriel. The first three stand out as the central antagonists of the early and mid game. After YHVH refuses to send a Messiah, they decide to create one of their own in Aleph, while also creating four others that were supposed to help him in some way to become the Messiah. After Mekata sends word out to Aleph that he'll reveal the truth behind everything, the three trick Abaddon into swallowing Valhalla in order to silence him. When he's finished, they banish him to Makai. After Zayin goes rogue, they deliver an ultimatum: Either Zayin surrenders or everyone in Holytown suffocates. Aleph follows Zayin, where Gabriel helps Aleph defeat her comrades and the fake YHVH their insanity created.

Gabriel thanks Aleph for stopping the other Archangels and reveals her identity to Aleph while freeing Zayin. She then goes to help Zayin, who later awakens as Satan, fire the Megiddo Ark, believing in YHVH's plans. While she realizes Aleph doesn't belong on Eden on Neutral and Chaos, she nonetheless lets him continue without a fight. On Law, after YHVH's defeat, Gabriel laments that she no longer has a purpose, but because she didn't participate in the battle, she does not die like Satan. 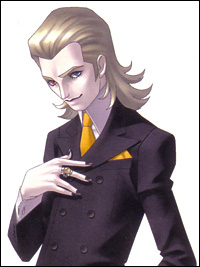 A former subordinate to YHVH who rebelled against his creator and was cast down to Earth. Like in Shin Megami Tensei I, he takes the form of a handsome young human named Louis Cypher. He rules over the demonic realm of Makai.

He was ordered by YHVH to cause The Great Destruction with Kuzuryu (the nine-headed dragon that makes up the mountains of Makai) but plotted to use its power against YHVH instead. In the Law and Neutral paths he must be defeated, though is more affable to Aleph in the latter and warns him that Kuzuryu will go berserk without his control. In the Chaos path he joins forces with Aleph to stop YHVH and Satan.

The god worshipped by the Messians, who believe Him to be a magnanimous and all-loving being.

In reality, He is a vain, megalomaniacal and vengeful god who has decided to wipe out humanity, partially in retaliation to the Center creating an artificial Messiah and virtual Thousand Year Kingdom, and partially because He is an incredible Jerkass who is fed up with people not worshipping Him enough. He is the Final Boss in every route, even in Law (where His actions disgust even His most loyal subordinate).

Word of God states that YHVH is not supposed to be an accurate depiction of the Judeo-Christian god with a similar name, but rather that His erratic actions are symptomatic of something going terribly wrong with the universe.