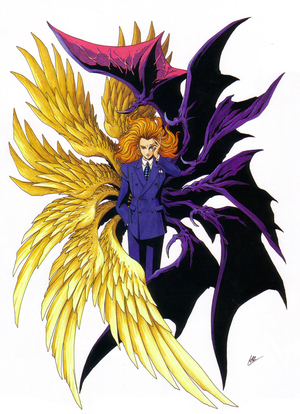 Warning: As a major recurring figure throughout the series, there will be spoilers for multiple games. You have been warned.

He appears for the first time in Shin Megami Tensei I as a man in a business suit named Louis Cypher that gives you cryptic, misleading information. He shows his true colors in the Chaos path ending, transforming into a blonde angel swathed in white robes, with golden horns and six feathery wings.

In Shin Megami Tensei II, Lucifer again appears as Louis Cypher, having turned against YHVH after being ordered to destroy the world. If you chose the Law and Neutral Paths you will face him in battle, but in the Chaos path he will join your party in order to stop Satan and YHVH.

In Shin Megami Tensei III: Nocturne, he appears in two forms: a young blonde-haired boy and an old man in a wheelchair. In both forms accompanied by a nurse in black who appears young when he looks old, and vice-versa. He gives the Demi-fiend his first Magatama, allowing you to survive in the Vortex World. If you complete Nocturne's optional dungeon, it is also revealed that he was the one to give candelebra to the Fiends, in order to to make the Demi-fiend powerful enough to challenge God.

In Raidou Kuzunoha vs. King Abaddon, Louis makes an appearance in the Tamonten Shrine as a "blonde young man" who appears to serve as a "spark" for Raidou and his actions. He is also referred to as Beelzebub, according to the Mushibito race due to the fact that they see him as a fly, not as a human.

After you get the "Chaos" ending and start a New Game Plus+ file, Raidou can take case files involving Louis and end up discovering his true identity while also battling his Lucifer form. Raidou can also use a Skill demon to transform as Louis, whose special ability is to gain money from talking to demons in the Dark Realm.

In Shin Megami Tensei IV and Shin Megami Tensei IV: Apocalypse, he appears again as the leader of the Chaos demons, although he doesn't take active role for most of the game as disguises himself as a human girl named Hikaru instead. While initially seeming to have a undergone a bizarre Humans Are Insects personality change and even forming an Enemy Mine team with the Law faction against the Polytheistic gods in Apocalypse, it is later revealed the Lucifer in these games is actually a sub-divided piece of Satan, a member of the forces of Law and The Dragon of YHVH. 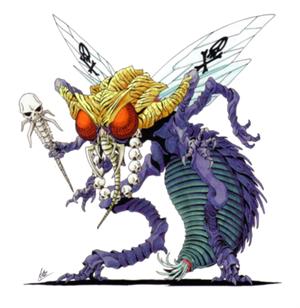 Beelzebub, also known by his human avatar form Baal Zebul, is a powerful and high-ranking demon; he is the right-hand man of Lucifer. 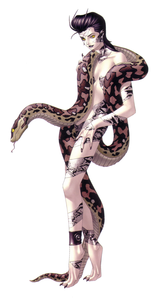 Lilith is the demon seductress, known as either first wife of Adam or an ancient Sumerian demon, depending on which myths you read. In the former, she's the mother of the Lilim. Her primary role as a character in the first Shin Megami Tensei, where she takes the form of the human Yuriko and attempts to win over the main character, who, according to her, is the reincarnation of Adam.
Astaroth / Ishtar

Astaroth/Astarte is one of Lucifer's generals, who is actually the goddess Ishtar forcefully fused with her counterpart Ashtar and turned into a demon by YHVH.
Asura

"A violent group of demons in Hindu lore. They were very powerful and caused the gods great trouble. They are a strict group and attack anyone who runs counter to their ideals. They were originally gods of light who were worshipped in Persia. The Zoroastrian god Ahura Mazda was one of them."
— Compendium info from Shin Megami Tensei: Strange Journey 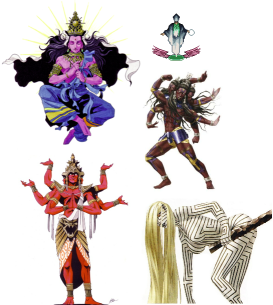 Originally Gods of Light. They were demonized and became Asuras thanks to YHVH. Though it might seem like they are all the same demon they are in fact a group of demons that share the same name. With each one having a different true form.
Mara

Mara is the demon lord of all temptations.

Due to the infamous nature of his appearance, no image of Mara will be shown. You can open up a search engine if you really want to know what he looks like. 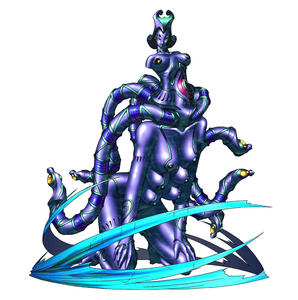