The Fiends are a recurring race of demons associated with despair, fear and death itself. If a character is a Fiend in a game, they're probably going to be one of the strongest demons around. More often than not, they have a Skull for a Head, though exceptions may apply. The roster has shuffled numerous times between games, but they are generally divided into two groups: the ones from the Book of Revelation and those from other sources.

Tropes pertaining to the Fiends in general:

The Four Riders of the Apocalypse 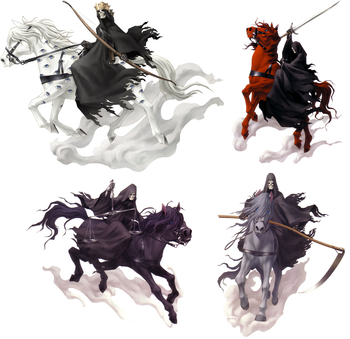 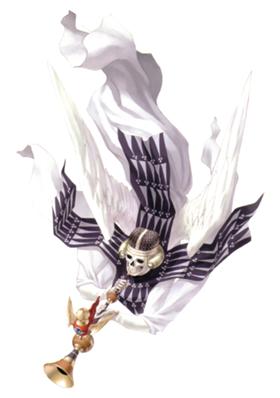 Trumpeter is the angel said to blow its horn at the end of the world, devastating the land.
Mother Harlot 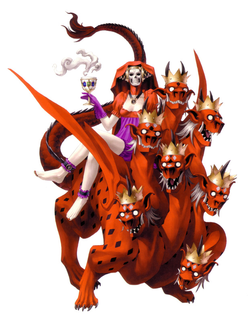 The Mother Harlot, otherwise known as the Whore of Babylon, is a woman accompanied by a seven-headed beast. In recent games, she has overtaken Trumpeter as the strongest Fiend. 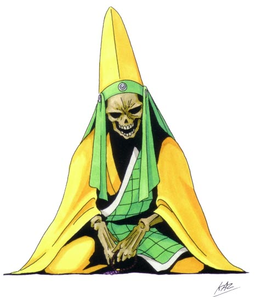 A mysterious Buddhist monk who has undergone a practice of asceticism to become Sokushinbutsu, a type of mummies created through asceticism involving self-poisoning and willing starvation to dehydrate the living body. Daisoujou is the personification of the ultimate form of mortification. 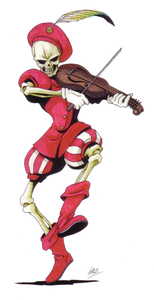 On Halloween, death itself would play the violin so the dead can rise from their grave can dance. In this series, David is the personification of this story of death.

"A ghost who appears as a small blonde girl. She seems young, but her magic powers are formidable. She is either the ghost of an English girl who died a sad death, or an evil spirit from a fevered writer's mind."
— Compendium info from Devil Survivor 2

Alice is a minor character appearing in the Shin Megami Tensei series. A young girl possessing formidable magic powers, she is taken care of by her "uncles", the Count in Red and the Baron in Black, of which both care for her deeply.

A nod to a gag manga, Ghost Q is a game-loving Fiend.
Hell Biker 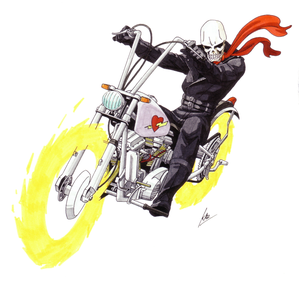 Apparently, one of the Hell's Angels obtained such a lust for violence that he became a Fiend. 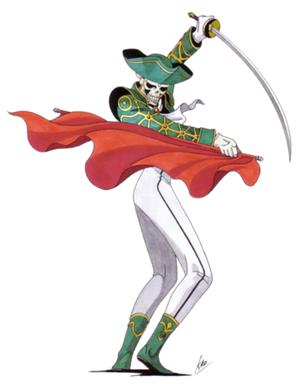 "A Spanish Grim Reaper born from the pursuit of aesthetics killing. With his terrifying sword Espada, he now preys on humans rather than bulls."
— Compendium info in Shin Megami Tensei III: Nocturne

The remains of a bullfighter. Despite being a skeleton dressed in a ridiculous matador costume, don't take him lightly.

Father Time himself.
En no Ozuno

By far the most unique of the Fiends. Like Alice, he was introduced as an NPC in the original game. After the ICBM strike, the Heroes found themselves in the Diamond Realm, cared for by En no Ozuno and his minions Zenki and Goki. After they left, he was never heard from again in the game, though it has since been revealed that he is also a Fiend...and quite a strong one at that.
Chemtrail and Plasma

Two demons that sprang from mankind's fear borne from crackpot theories, one concerning the toxicity of the contrails planes leave in their passing, and the other from the mysterious effects of plasma technology.