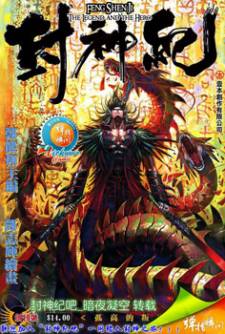 Feng Shen Ji is a manhua written by Zheng Jian He, and drawn by Tang Chi Fai. It’s known for its great art.

In a land reminiscent of old China, called Shang, a messenger appears in order to deliver a divine edict to Shang's emperor. Basically, it goes a little like this: "Go out and plunder the neighboring lands for resources on behalf of the gods." In face of this heavenly decree the emperor chooses to say "Fuck it," and decides to take up arms against the deities he, and his ancestors, worshipped in order for the denizens of Shang not to live under the tyranny of the gods.

And so begins the epic adventure of Feng Shen Ji.