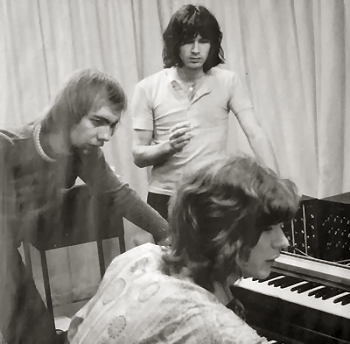 Quatermass was a progressive hard rock group from London, England. The group consisted of John Gustafsonnote (formerly of The Big Three and The Merseybeats, and later of Roxy Music) (bass, vocals), Pete Robinsonnote (of future Brand X fame) (keyboards), and Mick Underwoodnote (later of Gillan and Episode Six) (drums), and was active for a considerably brief period of the early 1970s.

Eschewing the seemingly prerequisite guitar in favor of lead bass, and epic organ lines out the wazoo, the group's groundbreaking sound saw them touted by their label, Harvest Records, as a "band of the future," destined for greatness. The group released a Self-Titled Album in 1970, a formative entry in progressive rock; they dissolved shortly thereafter due to a lack of commercial success, rendering them a well-remembered Cult Classic still held in high regard by prog enthusiasts today.

The group was resurrected under the informal name of Quatermass II in The '90s, with Underwood as the sole original member (and Gustafson as a songwriter). They released one album before the group was disbanded for the second and last time at the close of the decade.

Not to be confused with the Quatermass franchise, though the band was indeed named after it.