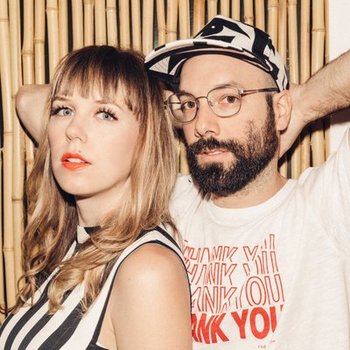 "Jack Conte and Nataly Dawn collaborate on music. This is what it sounds like."

Pomplamoose are a quirky music duo consisting of Nataly Dawn (born October 29, 1986) and Jack Conte (born July 12, 1984). Their genre could probably be described best as "indie alternative jazz pop rock". They became popular on YouTube in late 2009 with some covers of pop songs, but also have lots of original music of their own. They appeared in a few TV commercials for Hyundai and Toyota.

They originated with a distinctive style of music videos called "VideoSongs": "What you see is what you hear (No lip-syncing for instruments or voice). If you hear it, at some point you see it (No hidden sounds)." As this proved prohibitively time-consuming — not just by taking forever to film, but by consequently slowing their creative output — they segued into traditional music videos in 2014. (This also gave them time to plan a wedding, which they held in 2016.)

. They also have their own solo careers; their YouTube pages here

. Conte is also the founder of Patreon

, a crowdfunding service for independent artists.

This duo and their music provide examples of: