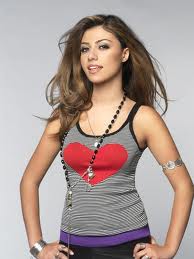 Gabriella Lucia Cilmi (born 10 October 1991) is an Australian singer-songwriter. She is best known for her debut single "Sweet About Me", released in Australia in April 2008. She also is super famous in the UK and her newer releases are focused there.

She soon started on her sophomore album Ten, released in 2010. Lead single On A Mission came out soon after that, and it was a mild success both in Australia and the UK. She also released "Defender". This album was 60's 70's pop and jazz set in the future. It was lighter and softer then her jazzy debut.

She has since left that recording company due to executive meddling and releasing music problems. She's now with a new company (Sweetness Tunes) set in the UK who released her third album "The Sting". That album discussed how she broke up with her old company and a boyfriend around the same time. This album returned to her jazz routes and has a "Love Martyr" vibe.

Cilmi is of Italian-Australian heritage.