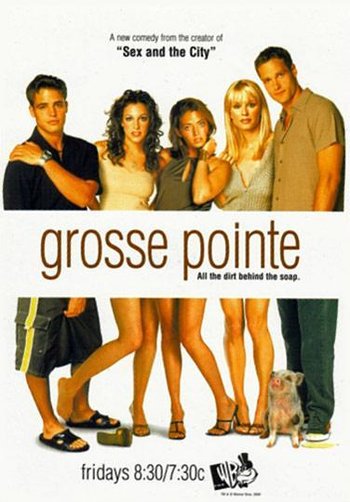 Grosse Pointe was a Show Within a Show Work Com that aired on The WB from 2000 to 2001. Based on Darren Star's experiences working on Beverly Hills, 90210, it revolved around the behind-the-scenes antics of an eponymous, struggling WB Teen Drama, and starred Irene Molloy, Bonnie Somerville, Al Santos, William Ragsdale, Lindsay Sloane, Kyle Howard, Kohl Sudduth, and later Nat Faxon. It also frequently featured cameos from stars of other WB and/or Darren Star series.

Although it was highly reviewed by critics it lasted only 17 episodes due to low ratings, but it was later fortunately released on DVD. It can be considered a Show Within a Show version of another similarly screwed-over series, Action. Not to be confused with Grosse Pointe Blank.