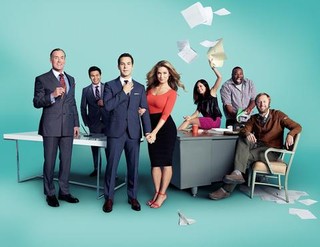 Ground Floor is a 2013 TBS comedy about financial businessmen created by Bill Lawrence and Greg Malins. It follow Brody, an up-and-coming money manager, and Jenny, a working-class building supervisor, as they build a relationship.

It stars Skylar Astin as Brody Carol Moyer and Briga Heelan as Jenny Miller as well as Rory Scovel, Rene Gube, James Earl, Alexis Knapp and John C. McGinley as... other people in the building.

The show was canceled after two seasons despite solid and improving ratings.