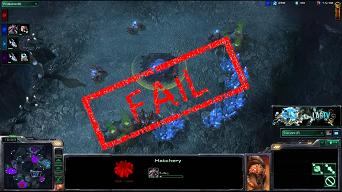 Here's what Jeff and Adam think of your late-game expansion.

NovaWar: Good evening, ladies and gentlemen, this is NovaWar!
MaximusBlack: And I'm an Angry Black Man.
NovaWar: And I'm an angry Batman.

(commonly abbreviated as LAGTV) is a YouTube channel hosted by two Canadian guysnote from Dartmouth, Nova Scotia to be exact named Adam (NovaWar) and Jeff (MaximusBlack). They have done some Let's Plays for Resident Evil 5, Portal 2 and Left 4 Dead 2, although they are mostly known for their StarCraft II commentary series called "When Cheese Fails 101", which was retooled for a season "Will Cheese Fail?" and has since returned to the "When Cheese Fails" format. Though which player will win is not necessarily known because of the existence of double cheeses.

Unlike their contemporaries such as Day9, Husky Starcraft, and TotalBiscuit, who cast games from the level of Tournament Play, LAGTV casts fan-submitted replays of mid- to high-level Ladder games submitted by their fans, in an attempt to analyze in-depth what happens when cheese tactics fail. The games are typically cast blind, with neither NovaWar nor MaximusBlack knowing what is going to happen. While the series is primarily intended for entertainment, Adam and Jeff are also excellent commentators, dissecting in detail what each player is doing right and wrong. Players who want to learn how to defend against cheese—or perpetrate it!—should consider this show required reading.

LAGTV also casts more traditional 1v1 Ladder games, typically introduced as "Normal-Ass Normal Games" to keep them separate from When Cheese Fails 101 proper. They have additionally produced a series called "NovaWar Says," in which Jeff has to play 2v2 StarCraft games under constraints chosen by Adam. Their second channel, LAGTV2

, was originally slated for just Minecraft gameplay videos and has since panned out into a Lets Play channel of various games and their "Dear LAGTV" series.

MaximusBlack and NovaWar are known for their insightful analysis, upbeat personality, natural chemistry and poop jokes. Lots of poop jokes.

MaximusBlack and NovaWar have eased back on Starcraft casts and are now running a Podcast called Technical Alpha.

However, they still go back to it with some regularity, and Jeff continues to stream the game.

Speaking of Technical Alpha, they record it on Twitch every Thursday night, starting at 8:00 PM EDT. The podcast is broken down into three sections: video games, movies and TV, and Tech Support (when they answer questions presented to them by Patreon pledges). Originally, they had a third member, PanicSwitched, but after about 70 episodes, he was forced to leave the podcast due to a promotion at work and the increase in responsibility that came with it. Expect lots of critique, lots of unintentional hilarity, and the occasional argument or soapboxing.

We are looking at some examples for When Cheese Fails 101, so Maximus, hit me up with that noooooooooooise! *boiyoiyoiyoiyoooing*