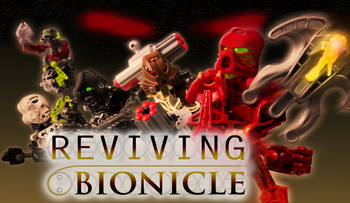 The cancellation of the first incarnation of BIONICLE struck a painful blow to fans everywhere. Ten years of story and sets came to a literal abrupt end (the ongoing story serials that took place after the main story are incomplete). A fan named Nathan, aka SuddenlyOranges

, decided to help out with dealing with the end by creating a short film called Reviving Bionicle, which deals with various BIONICLE sets trying to come to terms with the discontinuation of their beloved franchise. With the success of the short, the video turned into a full fledged series dealing with the misadventures of the toys consisting of three short films and a five-part miniseries.

And yes, the show takes a lot of cues from Arby 'n' the Chief, and yes Nathan's acknowledged it.

The series centers mostly around comedic exaggerations of the Toa Mata, who live in the house of the series' creator Nathan. Since their owner is suspiciously and conveniently gone from the house most of the time, the toys come to life and generally take part in self-destructive shenanigans and the occasional analysis of the toyline they hail from.

"The future does look bright."