In General
Grouped up together by circumstance, the Survivors are among the few survivors of the Green Flu epidemic who have been left behind by evacuation efforts, forcing them to fight their ways out of the crisis themselves. They are all seemingly immune to the Green Flu, giving them the sole edge they need to stand a chance against the infected hordes. 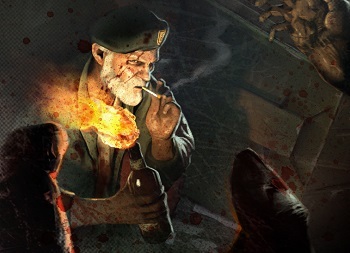 "Son, we just crossed the street... let's not throw a party until we're out of the city."

Bill is a Green Beret Vietnam vet. Having had nothing to do since he was discharged from the military for a knee injury, the zombies have given him a new purpose in life: to see them all dead. At least in the intro, he was featured as essentially the leader of the survivors. 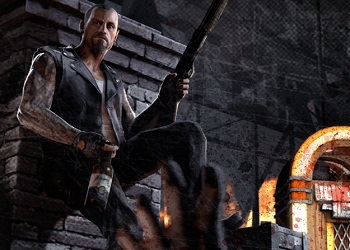 "Hey, look on the bright side: even if you don't make it, I'll still be really handsome."

A biker who dislikes Bill for unknown reasons (the feeling is mutual, and it's more of a rivalry, really), Francis treats the zombies as "the world's biggest bar fight." He is well known for his hatred of everything except vests and occasionally the army (only when they're saving his life, however). Despite the contempt he sometimes displays for his erstwhile allies, he sticks with them, and seems to legitimately care if they're badly wounded or killed. 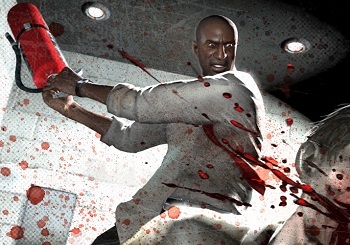 "Well, it can only get better, right?"

"Stay positive, guys! I've got a good feeling about this!"

Louis is an office worker who is barely dealing with the zombie crisis. Lacking Bill's experience, Francis' attitude, and Zoey's knowledge, Louis has trouble keeping up with everyone else. Despite the setbacks, Louis is always keeping his chin up and seeing the bright side of things no matter how bad things get. 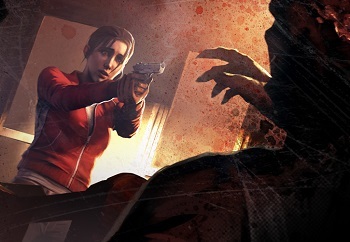 "No one left behind, right?"

"I can't get over how FAST they all are, it's not even fair. I'm calling zombie bullshit on that, you know? They're not... ALLOWED to be so fast."

Zoey was a college student who spent all of her time watching zombie horror flicks instead of studying for her classes. When the zombie outbreak hit, she had the cold comfort knowing that all her knowledge on zombies would finally be put to use. Appears to become the new leader of the team after Bill's death. 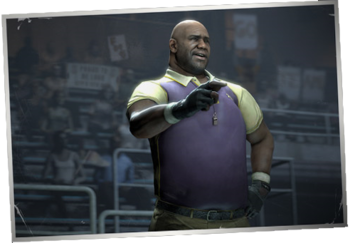 "My friends call me 'Coach.' I reckon y'all can do the same."

"This used to be a nice neighborhood!"

Once an aspiring college football player, Coach injured his knee and was forced to retire from sports, putting his physical education degree to use as a health teacher at FHS. Now, he's the defacto leader of the Savannah survivors. 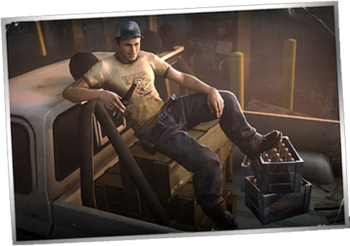 "We are the kings of the WORLD!"

Ellis lived a fairly carefree life before the outbreak, working as an auto mechanic and playing bass in his co-workers' band. In spite of the changes a zombie apocalypse brings, he's determined to keep that sunny disposition going. 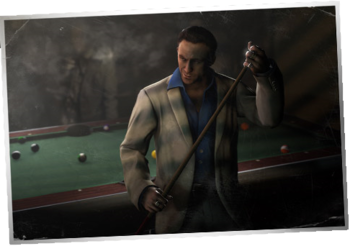 "I'm not legally allowed to own a gun. Hope everybody is okay with that."

"The last people on earth are me, and the goddamn three stooges."

A traveling con man and ex-felon, Nick only planned to stick with the others long enough to reach the evac point at the hotel. When that opportunity flies away, he's forced to stick around a while longer and learn to trust these strangers. 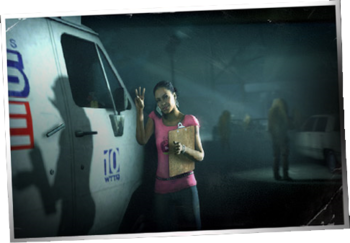 "This is some grim shit we got ourselves into..."

"Okay, nobody better make a crack about me being in the kitchen!"

Rochelle heard the reports about a disease outbreak on the east coast, but didn't expect a zombie apocalypse. Unfortunately, that's exactly what she found when her news crew came to Savannah, and now she's stuck with three strangers, fighting to survive.

In General
Victims of the Green Flu, these Infected differ from the common masses by possessing unusual symptoms that grant them inhumane abilities designed to maim, obstruct and kill any Survivors they encounter. They can be easily seperated from the Common Infected and identified by said symptoms heavily mutilating and mutating their bodies to the point of irreversible trauma.
The Boomer 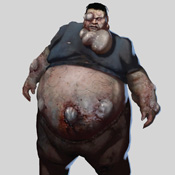 An extremely bloated infected person. The mutation of this poor soul has apparently turned their bodily fluids into potent zombie pheromones, which is puked onto the survivors with impunity. The Boomer explodes violently upon death. The only Special Infected with obvious models for male and female.

"He's gonna have to use that tongue to choke my foot out of his ass!"
—Francis

A tall infected with an extremely long tongue (although it might be his intestines) used to entangle the survivors. The Smoker fills the Infected's sniper role somewhat, capable of yanking a distracted survivor away from his friends from a distance. 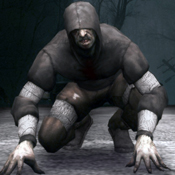 "Hunter around. Don't get pounced!"
—Zoey

An extremely fast and agile infected man capable of making tremendous leaps. The Hunter can take out lone survivors by tackling them to the floor and clawing them to death.

"HE'S BASHING ME INTO SHIT!"
—Ellis

An infected man with an extremely large arm. The Charger uses his mutated fist to rush the survivors and fling them about. 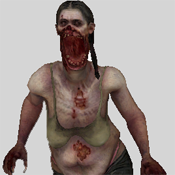 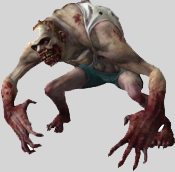 "It ain't right for a man to be ridden like that!"
—Coach

A hunched-over freak, the Jockey's method of attacking a survivor is to latch onto their back, and then steer them into more zombies or some environmental hazard. They are a bit more durable than most other special infected. 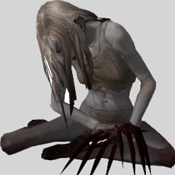 "There's going to be hell to pay if you keep aggravating that Witch!"
—Bill

The only unplayable Special Infected, the Witch is a haggish-looking woman who would just like to be left alone to cry. Unfortunately, those pesky survivors are running around, shooting off their guns and shining their flashlights. With her razor sharp claws that can incap or kill in one fell swoop and a surprisingly large amount of health, she'll make them stop. 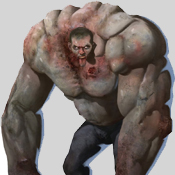 The Tank is a gigantic infected man, roughly eight feet tall, with an extreme amount of muscle mass and a missing lower jaw. They attack by swinging their huge fists and picking up a piece of the ground and chuck it at you. By far, it is the sturdiest Special Infected, but somewhat rare. Typically you only face one per level, though finales feature at least two.

CEDA/Mercy Hospital workers who failed to escape the infection. Because they were wearing hazmat suits when they became zombies, they are immune to fire. Unique to Dead Center and as of The Last Stand, No Mercy.

"Somebody shut up that clown!"
—Rochelle

These poor souls were once lovable (or slightly disturbing) comedians, now they are part of the army of Infected and want nothing more than to kill any survivor they find. Their shoes draw the horde with the noise they make. Shove them, and you honk their noses. Unique to Dark Carnival.

"I tell ya what, Mud People take all the fun outta mud."
—Ellis

These creepy infected inhabit the swamps of the Swamp Fever campaign, the titular Cold Stream, and as of The Last Stand, the sewers of the No Mercy and Death Toll campaigns and the rivers of The Last Stand. They move at normal speed while in water and can blind the survivors by lobbing globs of what everyone hopes is mud.

They were just doing their jobs tearing down an old sugar mill/handling baggage/building the top floors of Mercy Hospital, then the infection hit and they all became zombies. They won't follow pipe/bile bombs (because they have ear protectors on) and some wear hardhats for protection. Appear in Hard Rain and, as of The Last Stand, worker infected that are baggage handlers appear in Dead Air while ones that are construction workers can be spotted in No Mercy.
Riots

"That zombie's got armor. I want armor!"
—Coach

These annoying infected wear bulletproof armor which makes them very hard to kill, at least from the front. Upon death they will sometimes drop nightsticks. Appear in The Parish and Cold Stream.

"Get that zombie, he's got something!"
—Nick

A new type of infected introduced in The Passing. They went out into the world fully armed, some of them trying to help others survive, but they were not immune. Managing to kill one will often reward the players with useful supplies. However, as soon as he is attacked, he runs in the opposite direction. 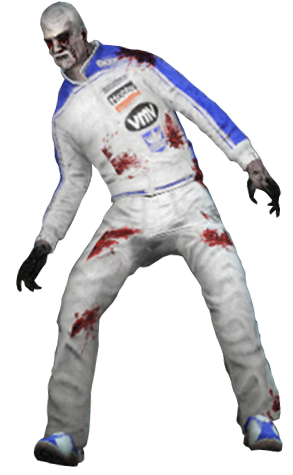 "If we see a Jimmy Gibbs zombie, someone else is gonna have to kill him."
—Coach

In life, Jimmy Gibbs Jr. was a famous stock car racer, writer of an autobiography, and a hero to many Southerners, particularly Ellis and Coach. Now, he has joined the ranks of the undead. The Survivors in Left 4 Dead 2 steal his stock car to escape the mall at the end of Dead Center. 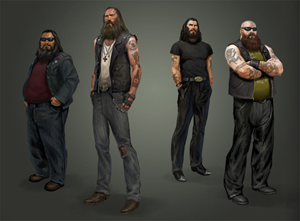 "You might've heard about a lot of bands cancelling their tours this week because of all the airports shutting down and the government telling people to stay indoors. To that the Riders say: We'll stop touring when we stop breathing. What America needs most right now in its time of trial is MUSIC, and that is one thing the Riders are proud to provide."

A veteran Southern Rock band, the Midnight Riders refused to stop their tour even after the zombie plague started. Their current whereabouts are unknown. They consist of Ox, the drummer, Smitty, the vocalist, Jake, the bass and keyboard, and Dusty, the lead guitar. Smitty looks almost exactly like an older, more ragged Francis. 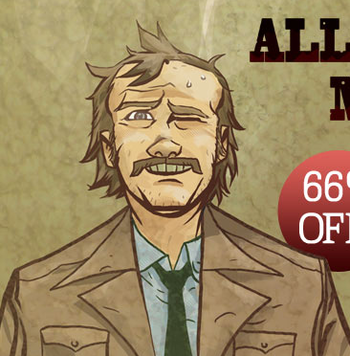 As seen in TF2

Whitaker barricaded himself inside his gun shop to protect himself from the zombies, which must be working out pretty well as he is still alive when the survivors find him. His only mistake was forgetting to grab some cola from the nearby store beforehand.

"My buddy Keith tried camping out on top of a building once. He was shooting crows, but the police were too busy tear gassin' him to ask what he was doin' up there."

Keith is a friend of Ellis who, given the stories about him, is most likely still alive somewhere. He seems to have survived several fatal accidents, but these events could have just been made up by Ellis. Keith's existence is widely debated amongst fans, but Word of God confirmed that Keith is just as real as the other characters.

After being forced to abandon their car in Dark Carnival, and losing a helicopter just before "Swamp Fever", the survivors in L4D2 are rescued by Virgil. He ferries the survivors to safety, stopping once so they can get him gas, before leaving them for good at a dock in New Orleans.

Not a character per se, but a powerful entity driving the infected hordes. If the splash screens are posters for a movie you're playing, it/he's directing the action. It will spawn more zombies than you need and fewer health items than you want. A particular quirk of it is to spawn a horde whenever the Survivors stay in one place for too long. Thanks to the Director, no two zombie encounters are the same.