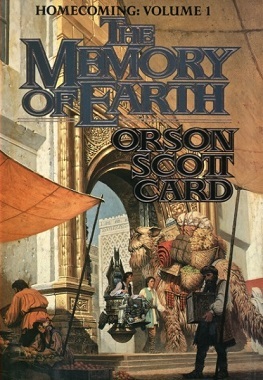 The series is set 4000 millenia in the future. The first three volumes (The Memory of Earth, The Call of Earth, and The Ships of Earth) take place on the planet Harmony. The central character is fourteen-year old Nafai, youngest son of Rasa, head of a prestigious school and a prominent leader in the martriarchal city of Basilica and Volemak, a wealthy trader and one of the few men in Basilica with political power. Nafai begins hearing voices he thinks are from The Oversoul, Harmony's God-figure. With the help of his older brother Issib, Nafai discovers the true nature of The Oversoul and embarks on a journey to save both it and Harmony itself. A journey that eventually encompasses both the brothers, their parents, their extended family and a couple of unlucky stragglers:

The fourth book, Earthfall, deals with the return to Earth, from the start of the trip, the conflicts along the way, and the the discovery of the two symbiotic races who have taken over Earth in humanity's absense: The "Angels" (giant, sapient bats) and the "Diggers" (giant, sapient rats).

The fifth and final volume, Earthborn, is set five hundred years after Earthfall, where the Nafari people (decendants of Nafai and his followers) faces a threat to their kingdom's peace, via a radical religious leader preaching a return to the "old ways" (i.e. oppression of the Diggers within Nafari lands). A threat that is enough to provoke the "The One Who Was Never Buried" (the last survivor of the Harmony expedition) to return to Earth and take a personal hand.

The Homecoming Saga, particularly the first three volumes, is The Book of Mormon reworked into a SciFi Fantasy epic. Most of the main characters from the first three volumes are expies of figures from the Book (for example, Nafai, Issib, Elemak and Mebbekew are basically Nephi, Sam, Laman and Lemuel). It is far less well known or regarded than other Card works, such as Ender's Game, The Tales of Alvin Maker or Empire.

The Homecoming Saga contains examples of: