Loads and Loads of Writers 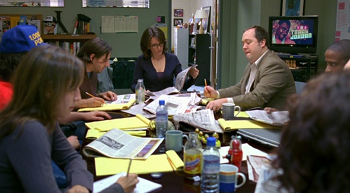 Creating works of media and fiction is anything but easy. From sustaining plot development to proper trope usage (and avoidance), it's no wonder why the whole field, in general, is perceived to be an ongoing minefield. But every once in a while, a concept comes along that is much too big for one or two people to handle on their own, particularly a soon-to-be Long Runner. At this point, the only plausible solution is to hire a group of writers to help you out with it, since the main creator's own writing isn't always going to be up to the expectations of the viewers and fans. Since literature, manga, and webcomics are almost always fully written by one or two people, don't expect any examples of this to exist from those media (though see Round Robin).