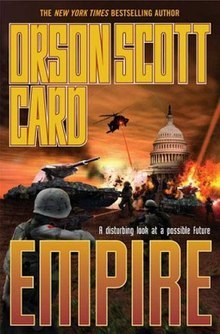 Empire is actually about tolerance and has been attacked by the intolerant for being so right-wing, which it absolutely is not. It would be funny if it weren’t so frustrating.
—Orson Scott Card
Advertisement:

A 2006 What If? novel by Orson Scott Card, telling the story of Major Reuben "Rube" Malich and Captain Bartholomew Coleman, who get caught up right in the middle of the next American Civil War - the war between the Left and the Right. Takes place in the same universe as the game Shadow Complex. Card was hired to write a story for the game, about a second Civil War, and the authors got more than they bargained for. Card takes a very serious look at the rising extremism and political tensions in modern America and extrapolates them to their logical conclusion: when both sides toss around enough "they're going to destroy our way of life" rhetoric, someone on one side will start shooting, and then it becomes a matter of self-defense for everyone involved. This has actually happened before, in several parts of the world, in the last couple decades, and Empire is the story of how it could happen in the 21st-century United States.

It was followed with Hidden Empire in late 2009.

The second novel contains examples of: