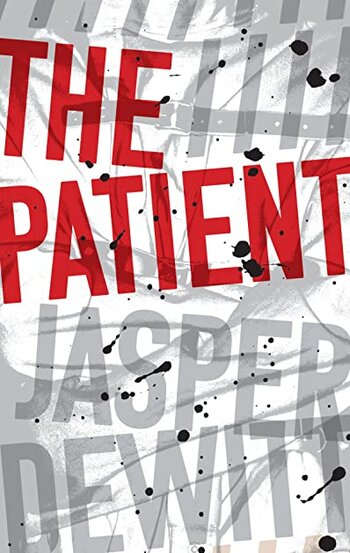 "I write this because as of this now, I am not sure if I am privy to a terrible secret or if I myself am insane."
Advertisement:

The Patient is a 2020 novel by Jasper DeWitt. Starting originally on Reddit's No Sleep board under the title "The Patient That Nearly Drove Me Out of Medicine," the story was later optioned by Ryan Reynolds and then published as a standalone novel by Houghton Mifflin Harcourt. One of the few Reddit works to successfully make the jump to traditional publishing, with Pen Pal being the other big example.

The year is 2008, and Dr. Parker H——- (all the characters have their last names blanked out this way to protect anonymity) has just started work at the Connecticut State Asylum. On the day of his first interview, he witnessed an orderly being wheeled out of a room, tied down to a gurney, screaming about one particular patient. Parker soon discovers that this patient, known only among staff as "Joe" and rarely discussed due to his fearful reputation, has been kept in the hospital for 30 years with no diagnosis. Everyone who's tried has, apparently, gone insane and/or killed themselves before they could figure "Joe" out. Parker, being convinced that his Ivy League pedigree and mental toughness from witnessing his own mother's violent mental illness at a young age will shield him from a similar fate, decides that he should try his own hand at figuring out the mysterious "Patient." What could go wrong?

As it turns out, quite a lot.

The Patient provides examples of: