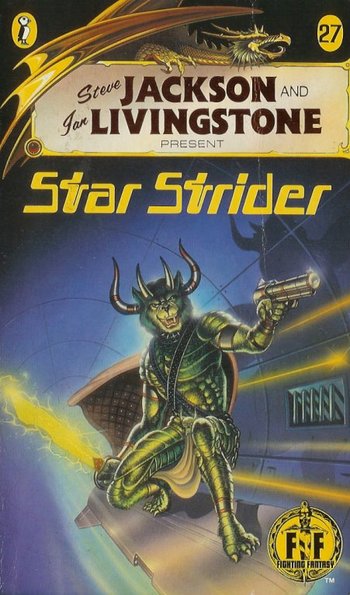 Green Chewbacca is About to Shoot You.
"''Cunning opponents and deadly Androids await you - as an intergalactic bounty hunter!'"
Advertisement:

You are a Star Strider, the best of Rogue Tracers, elite bounty hunters classes responsible for hunting criminals and performing covert, clandestine operations.

The Gromulans have kidnapped President Xerin of the Galaxy One Federation and have hidden him on Planet Earth. You are the best agent available for this rescue mission, and it is up to you, to retrieve the President before the Gromulans succeed in extracting vital, top-secret contents from the President's mind. You have forty-eight hours to retrieve the President; should you choose to accept this quest, you will face deadly Gromulaan droids, sinister, fear-inducing Gromulan illusions, and other potential hazards native to planet Earth. Succeed, and your criminal records will be expunged and you will be very rich.

Please Indicate Your Acceptance of the Mission (Y/N)...

Thank you. Good luck, Star Strider, the fate of President Xerin - and the entire galaxy - is on your hands!

Star Strider is the 27th entry of the Fighting Fantasy series of Gamebooks, written by Luke Sharp in 1987, and is among the slightly rarer sci-fi themed Gamebooks in the franchise.

The sci-fi based sub-installments of Fighting Fantasy is clearly testing the waters here at this point; you play as a bounty hunter rather than members of the Space Police or The Captain of a space vessel. Given the story and circumstances, a bigger emphasis on exploration is given here, and upon landing on Earth early in the game you get to explore the remains of the planet rather than beaming back to space and constantly skipping between planets.

Opting to expand the player's range of choices, Star Strider comes with an added stat of TIME - 48 units, representing the two-day deadline for you to rescue the President. Also, the FEAR stat from House of Hell returns, but thankfully it doesn't change throughout the duration of your adventure; you won't get scared to death, but instead the FEAR stat reflects your ability to withstand the fearful projections of Gromulan illusions. There are also special encounter boxes, for confrontations that doesn't lead to physical injuries, therefore without the need of deducting STAMINA, and an OXYGEN stat required for a compulsory escape sequence halfway through this adventure.

Sci-fi based adventures of Fighting Fantasy will continue for a short while until Sky Lord eventually puts an end to the genre.