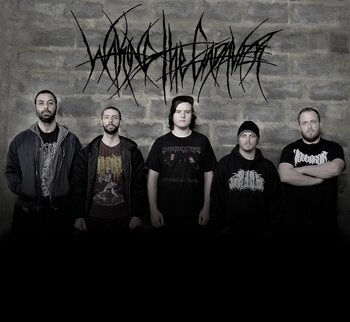 Waking The Cadaver are an American Deathcore band, playing in the vein of Slam Death Metal bands like Devourment. Ironically, the band's rise in popularity had begun with a Misheard Lyrics video sometime back even before they even made their debut. Since then, they moved away from the slam stereotypes and their variety of death metal/deathcore has moved to a more traditional NYDM sound ala bands like Suffocation and Dying Fetus.

They formed under the name Death To Honor before the name change in 2006. In that same year, they released their infamous two-track demo that would be the center of said video that would forever change them.

For Reasons unexplained, they split up in 2014. Campan is currently part of Hate Diplomacy along with members of Dehumanized, while Hartman is still going strong with his main band Mortal Decay (a longtime NJDM stalwart), Mayo has been devoting his time to the grindcore/powerviolence act Ground, and former guitarist Rob Wharton has been having a decent amount of success with Cognitive. The rest have not done much since then.

As of 2018, the band is officially back from the dead. Campan and Mayo have returned, while Tim Carey (Disinhume), Michael Thomas (Ground), and Matt Crismond (Corpse Hoarder) are all new faces.

The band provides examples of the following tropes: