Theatre / Both Your Houses 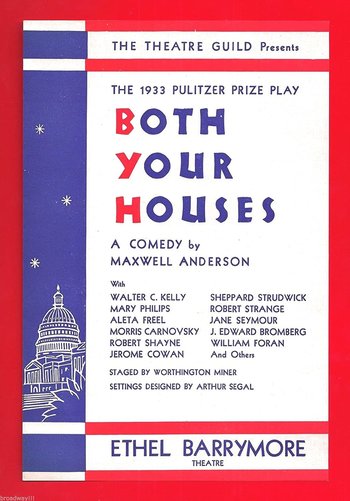 Alan: Is honesty possible here at all?
Gray: I'd say that honesty was so rare as to be almost unknown in any government, and impossible under our system.
Advertisement:

Both Your Houses is a 1933 play by Maxwell Anderson.

In Washington, various venal Congressmen are busy slapping additional items onto an appropriations bill for the construction of a dam. The bill is for the last $40 million to finish off a dam that is already grossly over budget, but various Congressmen have been larding it up with pork. Some, like Rep. Simeon Gray, are doing it for their constituents—Gray added a prison to be built in his district that will help the town and especially the local bank. Others are in it for straight-up graft—Rep. Solomon Fitzmaurice wants to anchor the Atlantic Fleet off of Long Island, to benefit a resort that he owns.

Into this comes newly minted congressman Alan McClean. Alan is from the district where the dam is supposed to be built, and everyone assumes that he will vote for it, but Alan is so squeaky clean that he launched an investigation into his own election. Sure enough, Alan dedicates himself to killing the appropriations bill. In this he is assisted by hypercompetent secretary Greta Nilsson, better known as "Bus". Alan soon finds himself at loggerheads with committee chairman Rep. Gray, while at the same time falling in love with Gray's secretary and daughter, Mary.

Both Your Houses won the Pulitzer Prize. Interestingly, it won the prize the year after a very different play about politics, the farce comedy Of Thee I Sing, won.