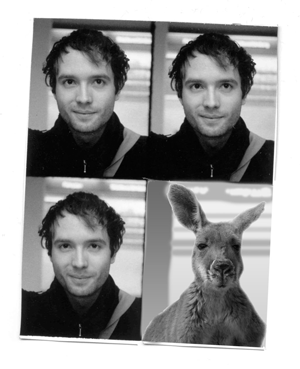 Marc-Uwe Kling is the human guy, if you were confused.
I live with a kangaroo. Said kangaroo is really into Nirvana, a damned scrounger and former Vietcong.

Marc-Uwe Kling (born 1982) is a German author, comedian, satirist and songwriter from Berlin. Most of his early work was in poetry slam and with the punk band Die Gesellschaft note  The Society , but he is most famous for his radio broadcast and subsequent books about his life with his roommate, a communist kangaroo. Four of them have been published:

While a lot of Kling's comedy is based on mundane everyday annoyances, his work is rarely unpolitical. He frequently criticizes right-wing politics (specifically the German far-right populist party Alternative für Deutschland or Donald Trump), capitalism, the police, authoritarianism and bureaucracy, makes fun of social conservatives and their ideas, but also pokes fun at the left. In Germany, Die Känguru-Chroniken are basically considered required reading for anyone on the political left.

In 2017, his comedic cyberpunk dystopian novel Qualityland was published. It tackles and criticizes subjects such as consumerism, capitalism, politics, populism and social relationships in the age of social media, features in-universe advertisements and news articles inbetween chapters, and exists in two available versions - One in light grey for optimists, one in dark gray for pessimists.note  The content is exactly the same, Kling just says it's "the first step to personalized literature", a theme that comes up in the book as well.

open/close all folders
The "Känguru"-Series
Qualityland
Imagine 1984 but futuristic and funny.