Film / All About Steve 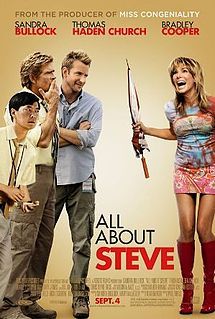 Mary Horowitz (Bullock) is a proud cruciverbalist, the writer of crossword puzzles for the Sacramento Herald newspaper, and a very awkward young woman. Her parents set her up for a date with the eponymous Steve (Cooper), a local newspaper cameraman and she is smitten. After driving him off with over-aggressive sexual advances, and subsequently losing her job in a crossword incident, she decides that Steve is her destiny and begins following him as he pursues the news.