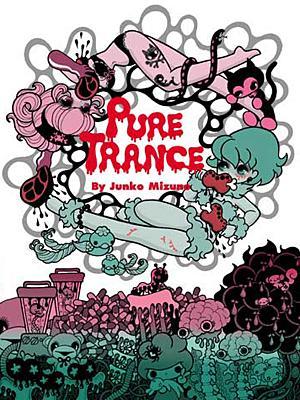 Pure Trance is a 1998 Shoujo Horror manga written by Mizuno Junko. In this dreamy Science Fantasy, Junko Mizuno illustrates a story full of catfights, alien safari adventures, evil experiments, and a girl who dreams of becoming a pop idol singer.

Following the Third World War, humankind left the toxic surface of the Earth and built an underground city to survive. The underground citizens, no longer having meat, live on "Pure Trance", a life-sustaining Food Pill. A serious social problem has emerged in this new society: hyperorexia, or severe overeating, a side effect of the pill.

The story follows Kaori Suzuki, a nurse working at Overeaters Treatment Center 102, a hospital which has been ruined by tyrannical director Keiko Yamazaki and her mistreatment of her workers. Kaori tries to make it through her miserable job, eventually rebelling against the director and fleeing to see the surface.