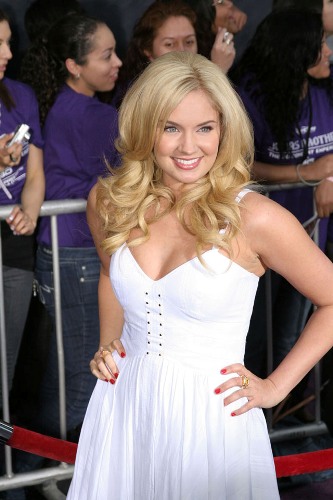 Tiffany Dawn Thornton (born February 14, 1986 in College Station, Texas, U.S.) is an American actress, comedian and singer, best known for her co-starring role as Tawni Hart on the Disney Channel Original Series, Sonny with a Chance.

Thornton made her television acting debut on the pilot episode of the Fox sitcom, Quintuplets. She then went on to appear in 8 Simple Rules, American Dreams, The O.C., Desperate Housewives, That's So Raven, Jericho (2006), Wizards of Waverly Place and Hannah Montana.

In 2009, she began her role as Tawni Hart on the Disney Channel Original Series, Sonny with a Chance and then went on to play a part in the Disney Channel Original Movie, Hatching Pete. Sonny with a Chance ended on January 2, 2011 and was replaced by So Random!, which premiered on June 5, 2011, with Thornton in a starring role. She also had a minor recurring role as Xyla the ladybug xylophone on Doc McStuffins .

Thornton became engaged to her boyfriend of one year, Christopher Carney, a court officer, in December 2009. Thornton confirmed that her former co-star Demi Lovato served as one of her bridesmaids. The couple got married in late 2011. She gave birth to her first son, Kenneth James Carney, on August 14, 2012 and another son, Bentley Cash, on March 1, 2014. Carney was killed along with another passenger in a car accident on December 4, 2015. On October 7, 2017; Thornton married Joseph Capaci, a family friend and fellow worship leader.