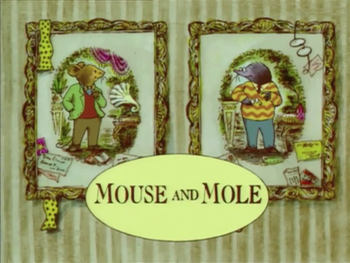 Mouse and Mole is a British cartoon that aired between 1996 and 1997. It was first a series of children's books written by Joyce Dunbar and illustrated by James Mayhew in 1993.

The cartoon is a slice of life series about the adventures of Mouse and Mole, voiced by Richard Briers and Alan Bennett.

In 2013, a half hour Christmas special titled "Mouse and Mole at Christmas Time". Sadly, this was Richard Briers' final film credit before he passed away earlier that year.

Mouse and Mole provides examples of the following tropes: