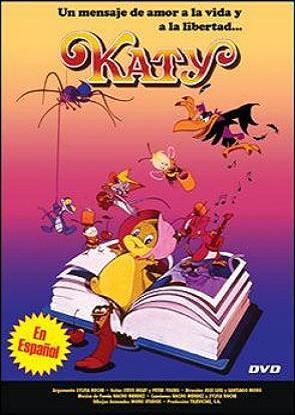 She may not look like it, but this is a caterpillar you do not want to mess with...
Advertisement:

Katy La Oruga (Katy the Caterpillar for English dubs) is a Mexican-Spanish animated film released in 1984. It deals with Katy, a young caterpillar who is curious and playful, who lives in a cherry tree with her three sisters. Having had enough of eating cherry leaves all day long, one day she leaves her tree and encounters the spirit of Mother Nature, who tells the young caterpillar that she must make a journey to discover by herself who she really is. In the progress, Katy meets many animals, makes new friends, learns a lot of things about the world, and ultimately achieves her dream by metamorphosing into a butterfly.

Based on an original story by singer Silvia Roche (which was also the basis for the music album of the same name) the movie was a huge success in Mexico and Spain, and was even dubbed in English too with the titular character voiced by Barbara Goodson in the English dub. The film got a sequel in 1987 called Katy, Kiki y Koko (Katy Meets the Aliens or Katy and the Katerpillar Kids in English). In it, Katy now as an adult butterfly, lives in the same cherry tree she used to live with her children, Kiki and Koko, two young caterpillars who are as curious and adventurous as Katy herself used to. Katy loves her children, but has become a somewhat overprotective Mama Bear, which sometimes annoys them. Meanwhile, a group of Starfish Aliens from a lonely asteroid send one member of their species to Earth to capture creatures for food so they can devour them and regain their energy. Alien X as he is called, makes landfall in the forest where Katy and her friends live and it's up to the two young caterpillars to stop him.