This page lists the characters of Corrector Yui and their associated tropes.

open/close all folders
The Human Correctors 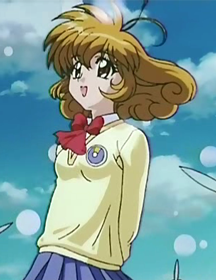 A middle school student who assumes the online identity of "Corrector Yui". She is very clumsy and childish, but she is also very kind. Little by little, she not only gains the trust of her teammates, but she also embraces the responsibility of maintaining the order in ComNet. She takes the Magical Girl role by accident, since IR thought at first that she was an "expert on computers" (which she clearly wasn't). 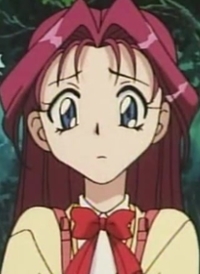 Yui's best friend from middle school. She is a mild mannered girl who is believed to be a computer-knowledgeable genius.

She later assumes the Corrector Haruna online identity at full when Yui's life is in danger. 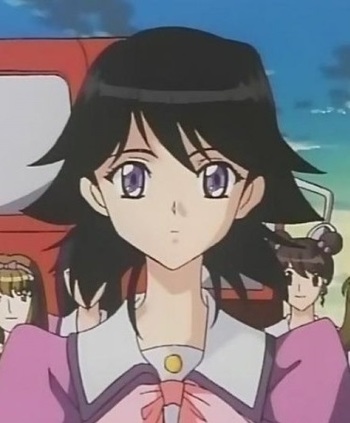 A mysterious girl who becomes a corrector in season two. She becomes the temporal neighbor of Yui, living with her aunt (Shun's mother), once Shun goes to America to keep studying Medicine.

She is the daughter of computer scientists Shintaro and Asuza Shinozaki, and becomes a corrector only because she needs to find a little girl.

He is the corrector software #1, also known as "The Regulator". His element motif is Wind. He was found by Yui in a Science Fiction MMORPG net disguised as a Space Pirate called "Shadowcat".

Synchro is the software program #2, also referred as "The Synchronizer". He has the power of Fire. He is the last software to be found since he was under the identity of War Wolf, one of Grosser's Fearsome Four. Under the identity of War Wolf, he is a skilled combat fighter, and retains his snarky side towards his companions and the correctors, especially Yui. Synchro eventually returns to his War Wolf identity thanks to the infection of the Boggles virus at the start of season 2, and is only released from it at the very end.

Corrector Software #3, "The Predictor". She has the Wind elemental power in her. When the Professor dispersed the correctors for their own sake, she took the role of a popular Fortune Teller whose site was later corrupted by Grosser.

Corrector Software #4, "The System Maintainer". His element motif is Water. He becomes the mysterious protector of the Nature Net after the Professor dispersed the eight Software Programs.

Corrector Software #5, "The Repairer". Her Elemental power is related to Water. During the dispersal of the correctors, she was hidden in the Medical Net, while searching for the Professor on her own.

Corrector Software #6, "The Archiver". His motif is Fire, something very ironic since he doesn't approve of violence. He was, alongside Follow, on a remote island hidden in the Marine Adventure Net.

Corrector Software #7, "The Compiler". His elemental power is Earth. He was, alongside Peace, on a remote island hidden in the Marine Adventure Net.

Corrector Software #8, "The Installer". He has the Earth elemental power. He was the one who Professor Inukai sends to look for the human corrector who would reunite the Software Programs and stop Grosser.

Leader of the Corruptors, and actual ComNet's main computer server.

The only female Corrupted Software on Grosser's Fearsome Four team. She has the ability to freeze anything.

The most knowledgeable of Grosser's henchmen despite his bulk size and his strength. Most of his tactics includes manipulating the environment to do his bidding (though most of it didn't do so well). In the second season, he becomes the library administrator.

The most intelligent of Grosser's henchmen. He is armed with primarily a light saber and computer viruses. His computer viruses can be used to corrupt other programs and make them do his bidding. In the second season, he works as a virus computer researcher.

Yui's childhood friend and Haruna's love interest. He is a boy who likes sports.

One of Yui's best friends from High School. She is an ecologist at heart.

One of Yui's best friends from High School. She is someone who likes to know and visit novelty and popular sites with her friends.

One of Takashi's best friends. He is also a computer geek and fan of MMORPGs and Science Fiction.

One of Takashi's best friends.

Yui's Titular Teacher, who has a childish personality that is problematic for her own students.

The creator of the Eight Software Programs and Grosser, and father of all ComNet. He attempts to stop Grosser by sending Correctors, but he is left comatose after Grosser finally caught him.

An engineering/medical student who lives next door to Yui's house. He is Yui's love interest and Ai's cousin.

Yui's father and a computer programmer. He is the designer of Fantasy Net and Marine Adventure Net.

Yui's kind and sweet mother, who is a stay-at-home housewife.

Ai's mother and widow of Shintaro Shinozaki. At the beginning of season two she's comatose and has been for a while, thanks to an accident that severed the connection between her mind and body.

Ai's deceased dad. His death is the reason of why Ai is the way she is in the present. He is also one of the scientists behind ComNet's creation.

A little but rebellious whale who has the most melodious voice in all the Marine Adventure Net's ocean.

A little girl who is always seen with a teddy bear when the Boggles virus is around.

He is a male NPC who usually works in the fairytale simulation net as a performer for a "Sun, Wind and Traveler" story drama. He asks Freeze to search for the "missing little girl", claiming he wanted her to return her, with one condition — that she shouldn't talk about it with anyone. He promised a large sum of reward money for Freeze, stopping her from asking too much about the job.

He is one of the scientists that was originally involved in the creation of ComNet, however he left at earlier stages of this because his ideas clashed with Inukai's and Shinozaki's. He was also a good friend of Azusa.