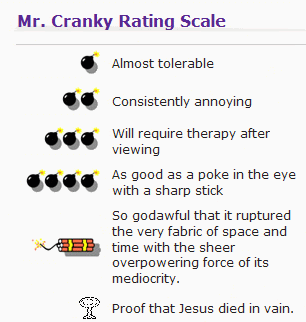 While many media reviewers stick to a familiar scale of letters, numbers, or simply stars when rating what they're reviewing, some like to mix things up, either by using a completely unique scale or by putting a spin on an old scale that makes it fresh and easily identifiable to that person. This makes them stand out from other reviewers and can be a draw to their work. It's even more of a point of recognition if these scales/systems incorporate a Catchphrase or something similar.
Advertisement:

Can sometimes incorporate Broke the Rating Scale in unusual cases.

Compare Abstract Scale (measuring something that can't really be measured in the first place) and Hiroshima as a Unit of Measure (using comparisons as a means of measurement).

Examples (sorted by the media being reviewed):