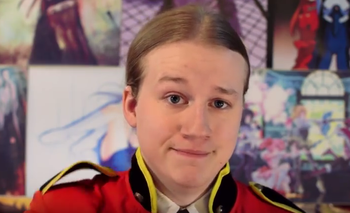 Tristan "Arkada" Gallantnote rhymes with "a plant", if you're wondering is a Canadian anime reviewer on YouTube. He is the founder of Glass Reflection

, co-founder of Podtaku, and former member and website owner of The DesuDesBrigade.

Along with Glass Reflection, he has two YouTube channels, one for anime

and one for gaming

, and has a Patreon page