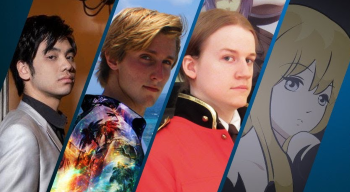 L-R: Gigguk, Holden, Tristan, and Jeanne.
"IT'S SHIT!"
— The Podtaku Cast
"Warning! The following audio may contain coarse language...
And other material that may not be suitable for a younger audience.
Listener discretion is advised.
Also we may spoil everything and anything so...

You have been warned."
— Disclaimer before every episode, narrated by Tristan

was a web-based podcast series that revolves around a group of anime critics that "gather around an invisible table on the internet and discuss their opinions on Anime and Otaku culture".

to discuss the '12 Anime Fall Charts, the series has come to enjoy wide-spread success across the internet. They have been the main co-hosts of the show for a year, with the two guests making appearances when a member of the main cast could not make the recording session.

In September 25th 2013, the Podtaku cast launched J-Taku, a separate podcast of singular topics devoted to anime, which was developed with the help of several other reviewers.

On January 10th 2016, it was announced that Podtaku would be ending and that there would be no more episodes of Podtaku or J-Taku henceforth. The final video contains messages from the cast of Podtaku and J-Taku, and can be found here

. It is also available on iTunes for free downloading.