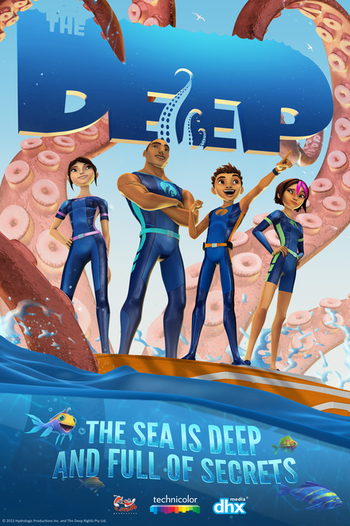 The Deep is an Australian/Canadian animated series based on the graphic novel of the same name by Tom Taylor and James Brouwer. The show is produced by Canada's DHX Media (through their acquisition Nerd Corps Entertainment, of Dragon Booster, Storm Hawks, League of Super Evil, and Slugterra fame) and Australia's A Stark Production.

The series follows The Nektons, a family of underwater explorers who live on a submarine known as The Aronnax. The Nekton family have devoted their lives to the exploration, discovery, and protection, of the oceans of the world, and all the marine life therein.

What's more, the Nekton family are also hunting for one of the biggest secrets the ocean holds, the sunken city of Lemuria. To that end, with the help of a mysterious old man by the name of Nereus, the Nektons are trying to locate and collect the pieces of an ancient artifact called The Efemicron, which could lead them straight to Lemuria.

The series debuted on 7TWO on December 1st, 2015, and is currently airing on Family CHRGD in Canada and ABC Me in Australia. A second season in September 2017 followed by a third in March 2019. A fourth season was announced in 2021, with Singapore's Infinite Studios now joining production.

The Deep contains the following tropes: