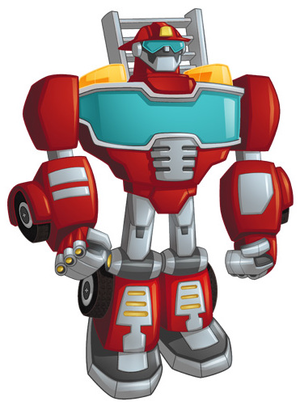 "Rescue Bots, roll to the rescue!"

A Rescue-Bot that transforms into a fire engine and is partnered with Kade Burns (he is also the leader of the Rescue Bots). He dislikes the fact the Rescue Bots have to pretend they are mindless robots. He has a temper at times, but understands the need to place saving lives above all else. 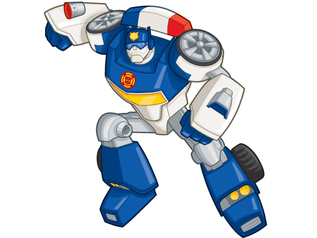 "Two peanuts walked down the road. One had high sodium content."

A Rescue-Bot that transforms into a police car and is partnered with Chief Charlie Burns. Chase has a "by-the-book" personality and tends to fuss over any new concept that violates any law he is familiar with, though at times his sense of humor and understanding emerges. He gets along well with his human partner Chief Charlie Burns. 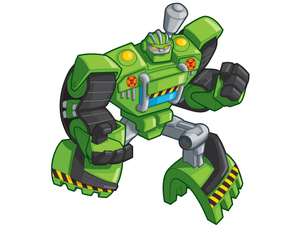 A Rescue-Bot that transforms into a bulldozer and is partnered with Graham Burns. Boulder is fascinated with Earth culture and is always eager to learn more from books and other sources. He has a very kind and friendly demeanor. 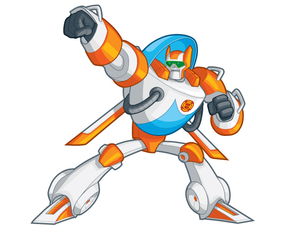 "Fear is a great motivator."

A Rescue-Bot that transforms into a rescue helicopter and is partnered with Dani Burns. Back on Cybertron, Blades had a land-based vehicle mode and is not used to flying, thus culminating in a fairly significant fear of heights. Out of the Rescue Bots, he is the most expressive emotionally. 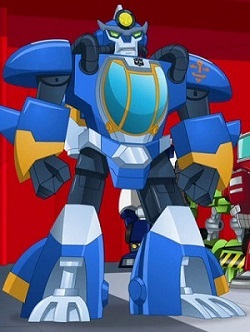 "Ah, ya got gumption, blip, I'll give ya that. I hate gumption! So stay out of things that aren't your concern, ya hear me?"

A crusty old sea dog and super tough drill instructor who doesn't suffer fools gladly. He transforms into a submarine and can also combine with his ship for a super mode. He is an old friend of Optimus Prime and instructs the Rescue Bots in sea rescue tactics. 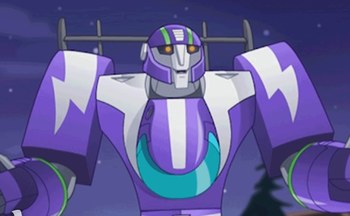 A hot rod racer and pilot who, along with his partner Salvage, crashed on Earth during caveman times and went into stasis to survive. At first he doesn't think much of Earth or the Rescue Bot mission but eventually learns better and becomes part of the team. He transforms into a racecar. 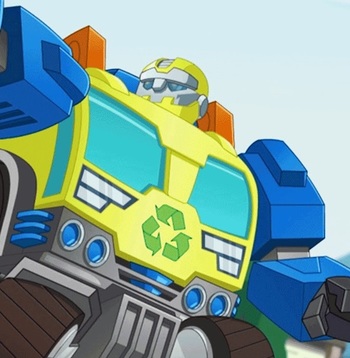 A former loader by trade, Salvage's ship crashed on Earth during ancient times and he and his partner Blurr were found by the Rescue Bots thousands of years later. A gentle giant with a penchant for tinkering, Salvage loves to collect old "junk" and rebuild it into something new and useful. He transforms into a garbage truck. 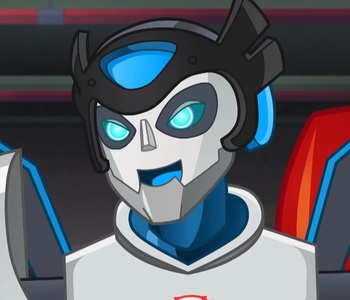 A covert operations specialist sent by Optimus Prime to assist the Griffin Rock Rescue Bots. Quickshadow is very effective at what she does and prefers to work alone rather than rely on a team. She transforms into a sports car.

Leader of the Autobots, who gave the Rescue Bots their mission. He appears mainly via view-screen.

Legendary Autobot Scout, war hero, and member of Optimus Prime's team of Autobots. As seen in Transformers: Prime, Bumblebee lost his voice box in the line of duty (really, it was Megatron torturing him, but this was glossed over) and possesses a unique form of speech. 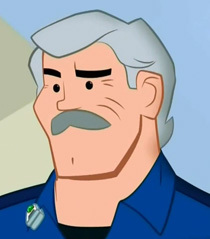 Griffin Rock's chief of police and leader of its Rescue Team. He is also the father of Cody, Kade, Dani, and Graham. He gets along well with his partner Chase and is a very levelheaded man. 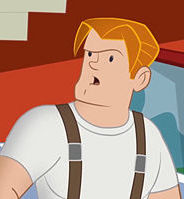 Cody's older brother and Griffin Rock firefighter. He is somewhat of a glory-hog and isn't too keen on working with Heatwave at first, though they eventually come to respect each other (though neither would admit it).

Cody's older brother and Griffin Rock construction engineer. At first he has trouble working Boulder due in part to his own misconceptions. Though he is fascinated by Boulder and wishes to learn about Cybertron, he mistakenly believes that because Boulder is from an advanced alien civilization, there is little he (someone from a more primitive civilization like Earth's) could possibly teach him. 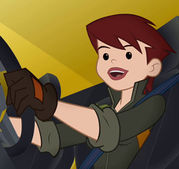 Cody's older sister and Griffin Rock rescue helicopter pilot. Unlike her partner Blades, Dani loves flying and has trouble getting along with Blades due to his fear of heights, but eventually learns how to work with him. 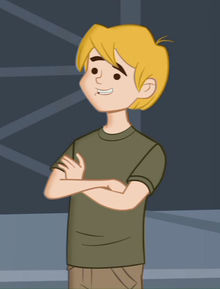 "Noble!"
The youngest member of the Burns family. Despite his age, he acts as the team's communications officer. He also acts to help the bots become accustomed to life on Earth and guide them. He acts as a mediator between them and his older siblings. Occasionally, he helps out in the field (such as riding in Blades with Dani). 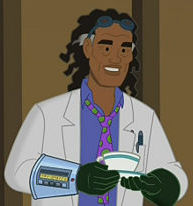 Griffin Rock's inventor, scientist, and father of Francine Greene. Though many of his inventions he creates are meant to be helpful or with good intention, they have a tendency to go haywire or cause trouble in Griffin Rock, which the Rescue Bots and the Burns Family are forced to deal with. As a result, Doc Greene often finds himself being rescued from various mishaps caused by his inventions. His inventions include a solar-powered car, Floatium (a substitute for helium) and a high-powered communications dish.

A scientist of Griffon Rock who disappeared years ago when she went to stop the Griffon Rock Triangle with her sub-aquatic ship the Midgard. In the present day the Rescue team found her and with her help stopped the Triangle. She now live in Griffon Rock.

The recurring antagonist of the series. Dr. Thaddeus Morocco is a mad scientist who invents things to cause damage. He is behind several of the incidents that occurred in Griffin Rock. He plotted revenge against Chief Charlie Burns, Mayor Luskey, and Doc Greene for making him an outcast.

The mayor of Griffin Rock.

A pair of small-time criminals who often steal Griffin Rock technology to commit robberies on the island.

The spoiled daughter of Madeline Pynch.

Priscilla's mother. The head of a lucrative company, her goal is to get even more money, by fair means or foul.